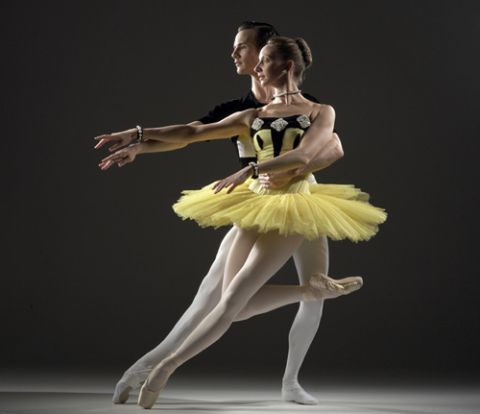 Celebrating its 40th birthday (and a new £11 million Glasgow home), it is timely indeed for Scottish Ballet to be invited back to the EIF with a triple bill spanning 60 years of classical ballet and contemporary dance.

With financial support from the Expo Fund, Scottish Ballet commissioned Ian Spink to choreograph a fresh, updated version of "Petrushka", based on the 1911 Stravinsky/Fokine/Diaghilev ballet. As the curtain rose for the world premiere on Friday night, you could almost hear a united intake of breath when the audience observed the stunningly realistic set design.

This is St. Petersburg, early 1990s, where Eastern bloc meets Western society head on: huge Samsung advertisements tower over grim, grey Stalinist-era apartments.  Panasonic TV boxes are unloaded from a truck while a black market in vodka draws a large crowd - the nouveau-riche in fur coats, factory workers, businessmen and young trendy, bohemian girls seeking men and money. It's the local Fair and inside an HGV truck, a top-hatted magician sets up a stage to present his entertainers, a showgirl, strongman and Petrushka, a punky, Bowie-haired, street kid in Doc Marten boots. Working with the folk tunes and mechanical puppet rhythm of Stravinsky's score, Spink has seamlessly re-created "Petrushka" with an energetic, sexy blend of burlesque, hip hop, breakdance moves and pole dancing.