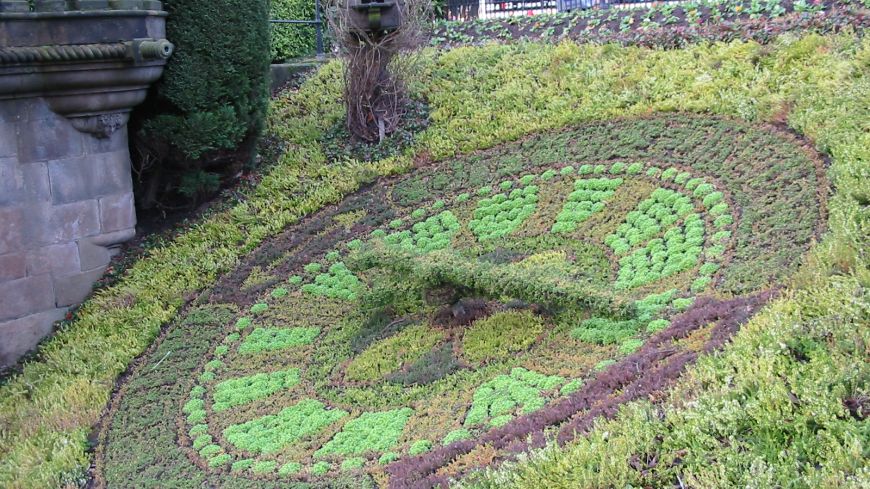 If you are walking uptown in Edinburgh, chances are you will pass by the floral clock in West Princes Street Garden. The clock is not only an immaculately tended floral display in the shape of a clock, it also tells the correct time. Commissioned in 1903, it was the first of its kind in the world.

Clock hands, numbers and the surrounding display comprise of growing, photosynthesising life. In 1973, an electric motor was installed to keep the clock hands moving. Before then the clock's mechanism had to be wound daily.

With tens of thousands of small, colourful plants, the clock takes two gardeners five weeks to plant, and is trimmed, weeded and watered by one gardener for the rest of the season.

The clock flowers from July until October.

Plants vary each year but some of the more commonly used varieties include Lobelia, Pyrethrum, Golden Moss and succulents such as Echeveria and Sedum.

The floral clock is situated half way down the stairs into the gardens across from the National Galleries, at the foot of the Mound. You have to lean over the stone wall to see the temporal flower bed.

Edinburgh's Floral Clock was inspired by a carpet bedding display in West Princes Street Garden in 1902 to commemorate the coronation of Edward VII. The following year, John McHattie, the City's park superintendent at the time, and Edinburgh clockmakers James Ritchie and Son created the floral clock by installing a clock mechanism in the base of the Allan Ramsay Monument.

The early designs for the clock were carried out by John McHattie who was advised by James Mossman, a direct descendant of the court jeweller to Mary Queen of Scots. The first clock began ticking on 10 June 1903 with an hour hand only. A minute hand was added in 1904.

In 1905 the mechanism based on organ pipes and bellows to replicate the sound of the cuckoo was installed in a box next to the Floral Clock to record the hour. The early mechanism did not include the house for the cuckoo or indeed a full scale model of the bird.

Until 1928, the design of the floral clock was based on geometrical shapes with the clock numerals being clearly identified by using a yellow leafed plant. William Grant was appointed Head Gardener in Princes Street Gardens in 1928 and designed and supervised the planting of the clock until he retired in 1946. During the Second World War, motif designs on the clock commemorated wartime events and victories.

In 1953, a house for the cuckoo was installed with a life-size replica of a cuckoo which appears outside the house to sound every quarter hour

The original 1903 clockwork mechanism that drove the Floral Clock was converted to electric in 1973.