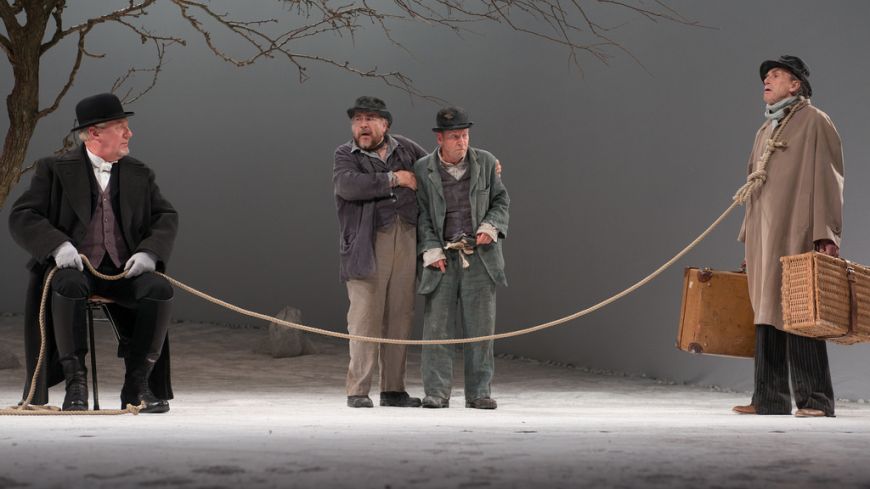 One might imagine theatre has had its share of revolutionary moments, but most of its past is of incremental adjustments.

Not so with Samuel Beckett’s ‘Waiting for Godot’, as the article by Peter Hall reprinted in the programme for this Royal Lyceum production points out; it opens with the late Robert Morley realising that the theatre of his generation had ended with the first English production of Beckett’s ground-breaking play.

It’s fitting, then, that the season celebrating 50 years of the Royal Lyceum Theatre should include ‘Waiting for Godot’.

Vladimir (Brian Cox) and Estragon (Bill Paterson) inhabit with conviction Michael Taylor’s setting that makes full use of the Lyceum stage, luminously lit by Mark Doubleday. Although their characterisations amply prove that Beckett is indeed funny, it’s in the play’s moments of calm that one realises how much they achieve, as each actor becomes the other’s perfect foil and we listen to the perfect harmonies they produce.

‘Waiting for Godot’ is often termed a ‘classic’, with little reflection of what that may imply, but as with a classic dish, coq au vin or Irish stew, perhaps, the challenge is its reproduction which keeps faith with its integrity without being intimidated by anyone’s expectations.

If there’s a cavil, to be had, then, it’s that while Beckett’s humour is relentlessly unflinching in the contemplation of oncoming extinction, there were moments when, faced with looking the demon in the eye, this production seemed to blink.

That said, these were moments, and possibly any directorial choices involved were made with half an unconscious eye on an audience that, whatever may be done, will remain resolutely and chiefly themselves.

In fairness to the production, however, all the necessary ingredients are fully in place to make what is already a very fine production into a truly unmissable one.