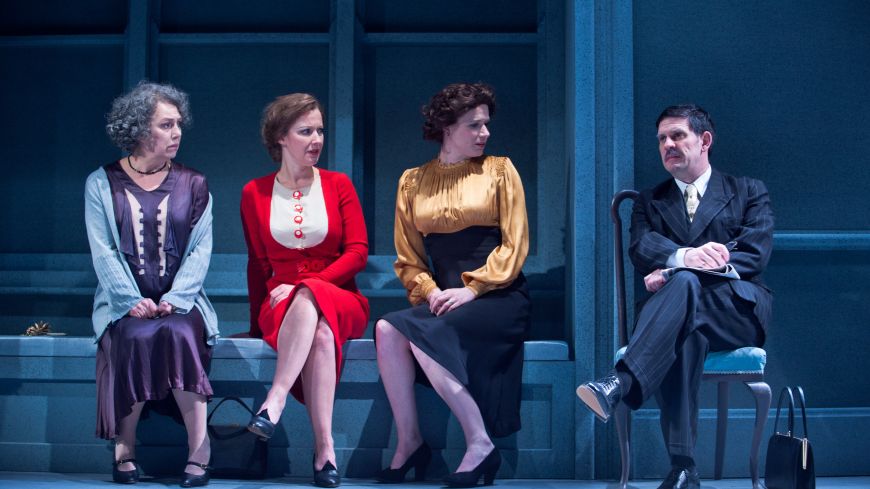 J. B. Priestley wrote a series of plays known as his ‘Time plays’ that were a result of his interest in the complex concept, advanced by J.W. Dunne and P. D. Ouspensky, of the possibility of there being several time dimensions.

Priestley’s ingenious narrative in Time and the Conways weaves through time to show the radical idea that time may not be, as most of us perceive, linear but multi-dimensional.

Time and the Conways was written and performed in 1937 and covers the period from the end of the First World War to that time when another war was a dark shadow looming. It focusses on the six siblings and the cheerful widowed mother of the well-to-do Conway family who live in the fictional suburb of Newingham. It, amazingly, allows us to see the kindness of the ‘long view’ that the isolated character Alan Conway, discreetly and sensitively played by Richard Conlon, has concluded to be the wisest one.

There is a babble of party exuberance in the auditorium (that could almost have been some noisy theatre goers) as the house fills. The morale boosting WW1 marching song, Pack up your Troubles in your Old Kit Bag and Smile, Smile, Smile aptly heralds the drama.

At first, the piece seems stagey and anachronistic til its deep richness slowly unfurls.

The Conway girls buzz around the stage in a rosy bubble of innocent happiness, creating scenes for a now unrecognizable game of charades involving guessing at words, not plays, films or books. The actors’ skills in mimicry were already evident in these snippets of miniature plays within the greater play.

After a shift in tone announced by the atmospheric music by Philip Pinsky, we see the results and impact of one pivotal moment in time that dictates the shape of a life; one that all of us can surely relate to. The ideals of Madge’s Jerusalem, Kay’s writing, Hazel’s glamorous marriage and the ill- fated Carol, who lived her life in a minute or as their favourite poet William Blake said in the poem Auguries of Innocence quoted in the play, ‘…eternity in an hour’, can only be viewed through the ghostly light of a lost time.

Interest in money, property, shares and power has replaced their youthful exuberance along with deep disappointment. The audience is privy to a George Bailey moment by glimpsing the possibilities of a wonderful but very different life.

The set’s calming grey-green of the Georgian drawing room is a perfect backdrop to the exquisite costumes that subtly reflect each of the Conways’ characteristics.

It is difficult to single out anyone from this superlative cast but Andrew Clark plays a superbly unpleasant Earnest Beevers, Sally Reid’s Madge is a brilliant morph from bright young thing to tight mouthed tweed and Jessica Tomchak is the essence of shallow glamour turned subdued victim as Hazel.

The English accents of the cast sounded completely authentic, albeit to my own Scottish ears. The play is elegantly directed by Jemima Levick from Dundee Rep.

J. B. Priestley was an utterly human writer. He had a clear-eyed view of the world and its inhabitants that never gave in to bitterness. A great human kindness suffused his work. It is utterly fitting that this fine philosophical play of his be reprised to such a standard as produced by this excellent company.