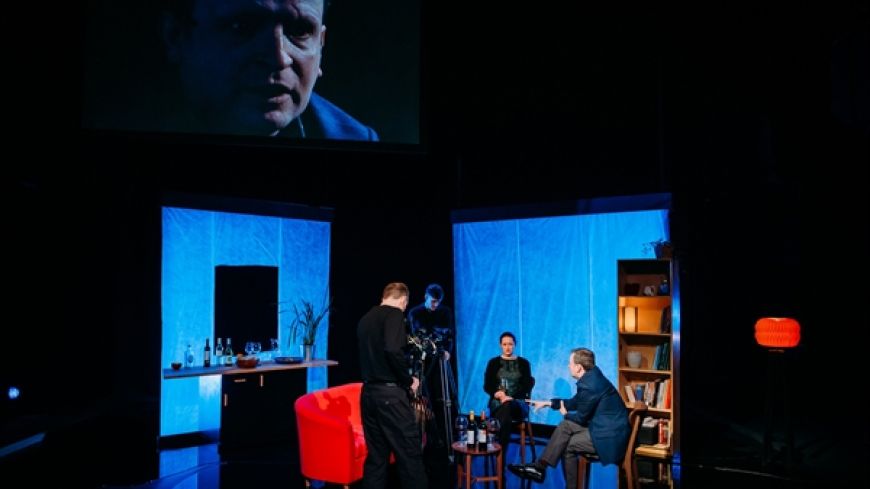 ‘What are you most frightened of?’ The first of many questions posed in a live, filmed and improvised political debate. It's an art forum we are not entirely used to but can resonate with, programmes like Question Time or those all-famous 2015 Leaders Debates. Instead, this is a theatre performance where actors Elicia Daly, Pauline Goldsmith and Barnaby Power are our David Dimbleby and create discussions about worldly issues which affect us all.

The Destroyed Room is a new performance from Glasgow based theatre company Vanishing Point in co-production with Battersea Arts Centre. The performance is inspired by Jeff Wall’s photograph with the same name, which shows a room where everything is ruined, broken and destroyed. Wall’s described his picture as a ‘form of re-encounter nineteenth-century art’ and particularly focuses on Eugene Dalacroix’s painting The Death of Sardanapalus which depicts the Syrian Monarch commanding the destruction of his kingdom and the slaughter of his people.

The actors discuss the ever prevalent story in Syria today and how people's lives can be destroyed in an instant. Each create their own distinctive characters who take bold risks to show their opinions on the refugee crisis and war on terror.

They highlight how we, as a western society, are attached to our phones, tablets and TVs constantly and where everything is at the touch of a button. They discuss the bombardment of horrifying images of this crisis on Facebook walls and Twitter feeds and question how alienated we have become to these issues.

They do this in an interesting setting of a picturesque, perfect room designed by Kai Fischer, surrounded by home comforts but with an ever present TV screen dominating the room. Camera operators film the whole discussion which distracts us from the present action. This is another unsettling comment on how we are first to be the first film horrific events and post them online before we help the people who are suffering. Director Matthew Lenton adds a great intensity to the piece by giving a Big-Brother, artificial feel to the performance leading to an almighty climax which leaves us feeling cold and ultimately shocked about the state of the world in which we live. This is aided by an electrifying soundscape by Mark Melville who slowly builds tension throughout.

At times the performance feels a little too direct to its message, perhaps due to the forum of the piece. However, this may be the whole point of the performance. Should we stop beating-around-the-bush and help these people? Should we turn a blind eye? Should we stop this "walk-on-by attitude" Nicola Sturgeon famously accused the Westminster government of? Or should we really look at the world and the truly terrifying horror which it faces? No one knows the answer, but these are the questions that this performance so perfectly poses to its audience.

This style of theatre is very reminiscent of the shocking, in-your-face genre of theatre in the 1990s which produced renowned, bold, political performances such as Sarah Kane’s Blasted and Mark Ravenhill’s Shopping and Fucking which took risks to highlighting the change of the world and what's yet to come. This is exactly what Vanishing Point do and now, more than ever, this performance forces us to face up to the fact that our 21st century world is the destroyed room. The room itself shows how our dystopian future may be upon us, something which we won't even realise until it's too late.

The Destroyed Room is a relevant and thought-provoking piece of work. This is what theatre is all about. It forces us to ask questions about the world. This is a performance everyone must see for the sake of the world we live in.