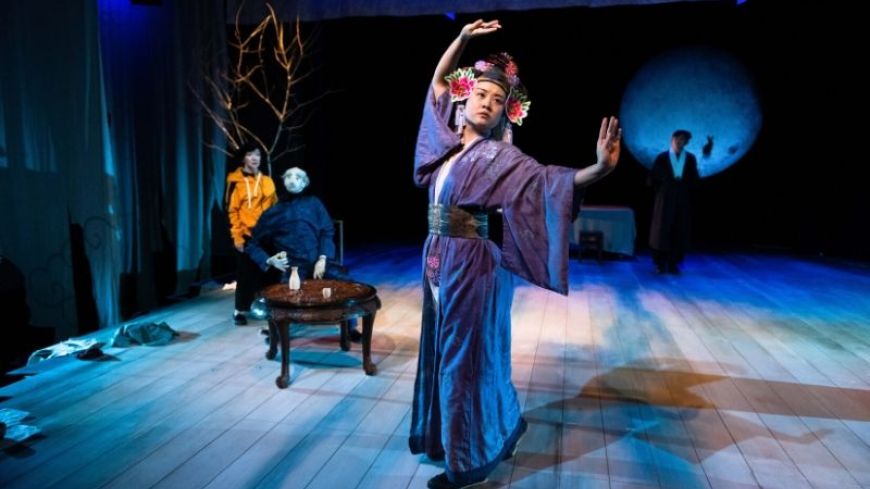 Grid Iron in co-production with the Traverse Theatre bring a handful of these stories to life for the first time in the UK, with new translations by Ewan Macdonald care of the Royal Shakespeare Company Chinese Classics Translation Project.

Noted for their theatricality and weirdness, co-writers Ben Harrison and Pauline Lockhart selected eight of Pu’s multi-layered morality tales, traversing dark macabre moments of wicked demons and lighter allegories of human weakness or strength, with unabashed sexual candour and a few Scottish twists. Everyone will find their own favourite amidst the selected octet, from the opening ‘Twenty Years a Dream’ exploring the romance between a bachelor and a ghost to the final ‘Magical Arts’ which mocks why humans want our fortune telling.

The philosophical core of the power of ancestry as guiding spirits, with the veil between living and dead key in many stories, gives a hopeful and touching notion amidst the anecdote’s comments on society, first published centuries ago, yet still relevant for contemporary audiences.

Karen Tennent’s translucent teasing set, Ruth Chan’s ethereal score and Bright Side’s video designs compliment the action but the magic of these fables is somewhat lost in the choice of utilising visual re-enactments that are often unclear in place of words chosen specifically to influence the mind’s eye, as is a true storyteller’s prerogative.

A slapdash combination of meta-theatre, storytelling, puppetry, projection and martial arts is delivered by a trio of performers – Robin Khor Yong Kuan, Luna Dai and Pauline Lockhart – with varying degrees of success. The show manages to retain allure amidst the jumbled transitions with the polish of “performance” rubbed away echoing a true storytelling delivery, but the patches are biggest when trying to combine live action and pre-recorded animations.

This doesn’t detract from the fact that Strange Tales transports us into a fascinating literary world and bravely tackles fantastical content with aplomb, achieving gasps and giggles from the capacity crowd, delivering a soft, spiritual message to focus on the important things in life, especially poignant at this time of year.

Runs til Saturday 21st December as part of Edinburgh's Christmas