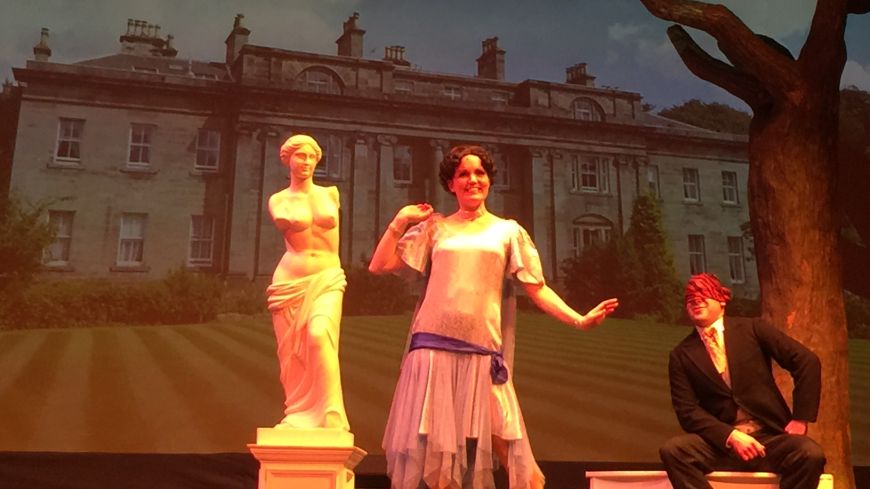 Winner of five Tony Awards, including Best Book and Best Original Score, The Drowsy Chaperone was acclaimed by New York Magazine as "The Perfect Broadway Musical." Far removed from your classic Rodgers & Hammerstein or Lloyd Webber hit shows, this is an affectionate homage to the musical extravaganzas of the Jazz Age.

The neat dramatic concept of this “musical within a comedy” begins with The Man in a Chair, as a thoughtful, intuitive narrator. Sitting in his apartment, at the side of the stage, he shares his passion for the theatre, the rising expectation of the audience as the house lights dim and the overture of tuneful melodies begins. From his collection of cast albums, he picks the 1928 production of his beloved “The Drowsy Chaperone,” placing the needle into the groove with its iconic crackle. Magically, the recording comes to life as the conductor raises her baton, the orchestra strikes up, the curtain rises and the show kicks off in colourful, exuberant style.

We take a time travel journey back to the decadent 1920s, the Gatsby-esque leisurely world of parties, caviar and champagne. The paper thin plot revolves around the wedding of Janet Van De Graaf, the glittering starlet of Feldzeig’s Follies, who has decided to retire from the stage after her marriage. This has enraged the producer Mr. Feldzeig who will suffer a serious box office loss and is adamant to stop the wedding, with the help or hindrance of the incompetent best man, a bumbling butler, a dastardly “Don Giovanni,” a dumb blonde flapper, and two pastry chefs (aka gangsters); not least is Janet’s gin-soaked Chaperone, a drunken, drowsy Diva.

Through a series of dizzying, fast paced scenes, the story unfolds with farcical frolic and flair in quintessential madcap manner. As a playful parody of popular 1920s Broadway shows, (and clearly modelled on the Gershwins’ “Funny Face”, with flapping flappers, a rich man and a dashing Atlantic-crossing aviator, starring Fred and Adele Astaire), the romantic tale of “The Drowsy Chaperone” is just a vehicle for marvellous song and dance numbers.

The choreography by Sarah Henderson is absolutely first class matched by extraordinary synchronised ensemble routines to nimble footwork such as the brilliant tap dancing double act by the groom and best man in "Cold Feet" to counteract pre-wedding nerves. Busby Berkeley pizzazz complete with a flurry of feather fans and with a sassy salsa, Aldolfo seduces the Chaperone in a sizzling hot Latino embrace, performed by Steven Smyth and Janice Bruce with gleeful gusto.

In the first act, the sound level of the orchestra often drowned out some of the lyrics but this seemed to level out to a better acoustic balance through the show.

The period is well captured by the beautiful costumes with a catwalk of pretty frocks, cloche hats, glittering gowns and tuxedo suits. For the witty song, “Show Off,” Janet changes her designer swimsuit several times as she sashays elegantly across the stage.

Directed by Laura Reed with exquisite attention to character portrayal and sharp, sparkling humour, the show buzzes with energy and comic timing. Claire MacLean portrays Janet with polished panache and debonair style, while her permanently sozzled Chaperone, is cheekily played by Janice Bruce like the outrageous, badly behaved Karen in the TV series ‘Will and Grace.’ Unperturbed by Prohibition laws, she drawls, “ Why is there an olive in my Gibson?”

Circus tricks too when Lech Boron (Robert, the groom), has to roller skate around the garden, trying not to crash into a statue. Oh, and he’s blindfolded.

For each scene, a chorus line of waiters swiftly move chairs and props neatly into place while the changing backdrop depicts the staircase, bridal suite, drawing room and garden respectively of Balbirnie House. What a perfect choice of venue, as regular winner of the Wedding Hotel of the Year (Scottish Hotel Awards).

As we watch the “live” performance, the Man in the chair is listening nostalgically to his recording, occasionally pausing it, which immediately freezes the action on stage. Apologising to us for interrupting the show, he is keen to add a few critical comments, laughing at politically incorrect caricatures. In his opinion, “Mature sophisticated audiences are too sophisticated to enjoy broad stereotypes on stage so we banished them to Disney; let the children sort it out!”.

Living a solitary existence, the narrator is a rather sad figure, hunched in his armchair with just a collection of cast albums and memories. Unlike the glamorous clothes of the cast, the Man in the Chair wears a baggy old cardigan; Derek Ward is exemplary in the role, quietly reflecting on the vital importance and joy of musical theatre, “Something to take you away from the dreary horrors of the real world, a little something when we are feeling blue. I just want a good story, a few good songs .. I just want to be entertained. I mean isn’t that the point.?”

“The Drowsy Chaperone” is a charming old fashioned musical comedy, a romantic fantasy, where characters fall in love at the drop of a hat with a spontaneous tango. This riotous, rollicking laugh-a-minute show by the talented Twilighters company ticks all the boxes. Pure escapism, slick entertainment and fabulous fun with a touch of sincerity at its emotional heart.