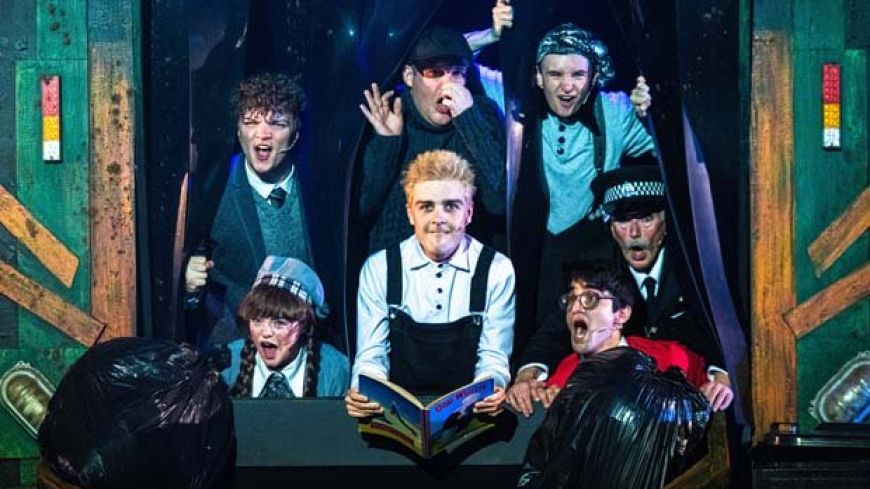 Oor Wullie is our beloved cheeky chappy even beating out William Wallace and Robert Burns to win ‘Scotland’s Favourite Son’ in 2004.  Along with The Broons, Oor Wullie was created by R D Low and Dudley D Watkins; he first appeared on the pages of the Sunday Post’s Fun Section back in 1936. Oor Wullie has hit headlines again last year due to the unveiling of his BIG Bucket Trail, which saw statues of himself sitting atop his iconic bucket all over the country - so, this will be the perfect time to debut his very own musical.

This production certainly has its work cut out for them, bringing an eighty year old comic into the present day. The language of the comic alone has lost many modern readers. With iconic lines such as ‘Well jings crivens and help ma boab’, it’s not the easiest to understand. We start this musical in the ‘real world’ with a new protagonist, Wahid, who is one of the twenty one thousand Scottish Pakistanis currently living in Alba. Although Wahid, played by Eklovey Kashyap, was born and raised here, he finds it hard to fit in with his peers, that is until a friendly school librarian opens his eyes to the world of the Oor Wullie Annual. Oor Wullie himself pops his head out of its pages looking for his old tin bucket. Together they take the time to understand each other, so the young audience is never left behind.

Martin Quinn, who brought Oor Wullie to life, was a joy to watch. His mannerisms, poses and physicality encapsulated the character we know and love. The childish saunter, dramatic wails and the twinkle-in-the-eye-comic-timing was perfected and reflected in the rest of the comic characters. All the old favourites join us in a chaotic goose chase to find the lost bucket. Kitted out in saris, the team out-smart PC Murdoch, brilliantly played by Ann Louise Ross, and come up against the scary bully Basher McKenzie. They jump back and forth from the ‘real world’ to Auchenshoogle, cleverly demonstrated by their costumes turning from black and white to brightly coloured. The set itself is covered in charming brickwork with primary coloured edges. It twists and turns to reveal many settings and hides many surprises, such as a glowing microwave. The lighting has issues, however, often leaving the actors in darkness.

The story is filled to the brim with funny adventurous moments such as getting eaten by a bin lorry, a ride on the Wullie Wagon and defeating bucket-headed goons in the scrapyard. The best moments were the ones not taken too seriously. The throwing of a dummy out a window had the audience in stitches. I wish this tongue and cheek approach was happening throughout the production but seems to be saved for the second act.

They manage a brand new slant on an ol’beloved tale and still stay true to its roots despite adding a singing Alexa. I do wonder if the musical aspect is truly necessary. The songs are not particularly catchy, the voices not particularly strong and the dancing is kept to a minimum. The music seems to get in the way of the gags and the shenanigans that make this production a joy to behold.

Despite these reservations this is an inclusive and uplifting evening that fills the fans with melancholy and the young with awe.