Oh! What a Lovely War, The Studio at Festival Theatre, Review 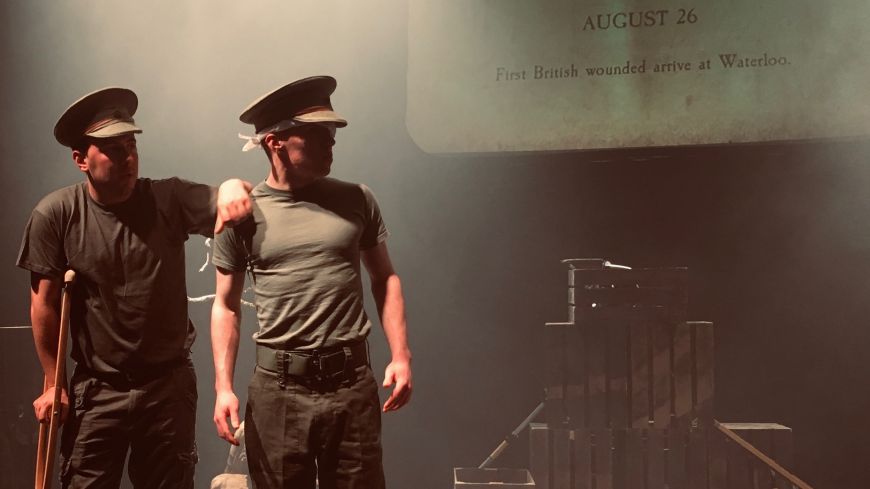 Captivate Theatre also performed this show in 2014 at the Edinburgh Festival Fringe and honour the centenary with another outing of this satirical musical which outright questions war rather than glorifying it, which is a hot topic currently with centennial events and remembrances.

Never performed enough and oft forgotten, Littlewood’s Theatre Workshop creation of 1963 may not evoke walk outs as it did in its day, but still packs a punch if delivered by an able ensemble, and this collective of twelve give it there all with nuanced performances amidst the jauntily seductive songs that darken as the play progresses and casualties mount up.

Interconnecting sketches surround the musical numbers juxtaposed with a screen of cold statistical facts, as the ensemble embellish upon a base uniform of olive-green fatigues into a range of characters, with a nod to the original as pierrot hats make many appearances.

Sally Lyall’s direction is creative within the minimalist set up, allowing the ensemble to ebb and flow, but always watching from the peripherals and reacting, helping the improvisational approach to be felt, live in the room with the players, summed up best overall as messily polished.

The use of more realistic props accompanied with the uniformed fatigues could be deemed counter-intuitive to the Brechtian approach at the piece’s core, but this production never forgets to remind the audience they’re watching a play and the mirroring images from the slideshow help solidify the horror that this isn’t a play, but history that happened, juxtaposing the mood and memories for an even more poignant overall affect.

Strong moments of delivery are noted in capturing the anger at Douglas Haig's attritional policy, a jeering mob of reaction to an impassioned Emily Pankhurst (Hazel Beattie), and a beautiful, understated rendition of ‘Keep the Home Fires Burning’ (Rosie Graham).

But the Christmas 1914 scene is one of the finest moments, highlighting the core message that it was the ordinary soldiers who got forgotten amidst incompetent generals and profiteers.

As the soft fluttering of ‘Stille Nacht, Heilige Nacht’ comes over the trenches, the libidinous British respond with ‘Christmas Day in the Cookhouse’ in a perfect example of conflicting emotions which are crucial to the piece, and this production excellently conveys.

The freeze-frame of a handshake is brought back to the memory later too as Haig's prayers for victory are accompanied by a battered infantry rewriting standard hymns.

Scott Coltman’s turn as MC does deserve a special mention of the famous, incomprehensible drill sergeant sketch, with a notable off-the-cuff highlight, as he barked “Get Back in Line” as an audience member dashed to the loo!

Coltman further got to flex his MC skills after a delayed second act, when The Studio’s fire alarm went off just as the interval started, earning a well-deserved laugh from the audience. It nicely summarises the enthusiasm from this collective who did not let the incident phase them, spurred on to deliver the second act with no qualms about eyeballing you from both sides of the frivolity and ferociousness.

Sure, there may have been some unintelligible accents and a few weak spots were the energy slightly dipped, but this doesn’t detract from the overall impact; encapsulated by mournful meditation of the appalling human cost of this conflict, which will no doubt feel even more sombre during the final performance, this Sunday, 100 years on, in a world where little has changed.