Let It Be, Edinburgh Playhouse, Review 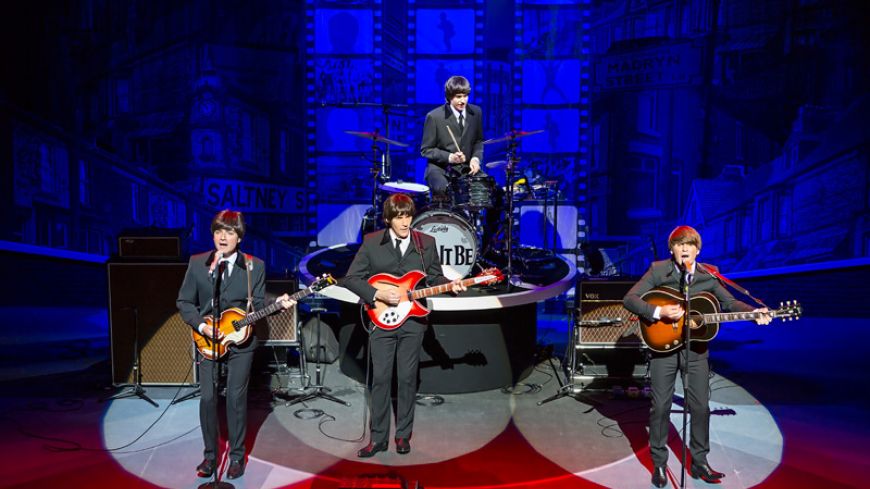 Nostalgia and what-might-have-beens are the vibes of this production, with Act I a celebration of the group's career highlights and Act II a reunion concert that never was. The Royal Variety Performance rolls into the Shea Stadium concert and Beatlemania, followed by the psychedelic Sergeant Pepper era and Abbey Road, continuing through more milestones. All the hits are on the menu with this one, and it is difficult not to sing along to these incredible and timeless songs. Luckily, the group prompts you to chime in and they drop out periodically to hear the audience in chorus, with more than a few members dancing in the aisles.

Screens around the stage play up the scenes and add imagery to what is, essentially, a polished cover band show. Footage of old concerts, kaleidoscopes and strawberries, vintage 60s telly adverts, and even you, the audience, stream out from the big, wood-paneled TVs that act as interludes and support for the band. It's welcome, but not ground-breaking.

Liverpudlian accents abound, the Mop Tops of Let It Be deliver Fab Four-part harmonies that soar; Emanuele Angeletti and Michael Gagliano, in particular, have a satisfactory vocal likeness to their Paul and John, respectively.

Notable is Michael Bramwell on programmed keyboards, using his set up to play out those specialised instruments which are vital accompaniment to memorable Beatles arrangements: horns, wind sections, and the specific nuances of the Rhodes/Wurlitzer and Harpsichord keyboards. Combined with the tight playing of the band center stage, this makes each number as close to a carbon copy of its original as a tribute performance can get.

While Act II felt like a slower stretch, the first half was a pleasing sing-a-long. This is a night of “can-you-imagines” for the younger Beatles fans and “remember-whens” for those lucky enough to have been there during the height of it all. This mightn’t be called a night of theatre, but pitching up a stage version of Across the Universe or crafting a quippy promenade of the band’s personal drama wouldn’t be the answer to a Beatles musical. This celebration of the music we all love is satisfying and feel-good, if a bit on-the-nose.