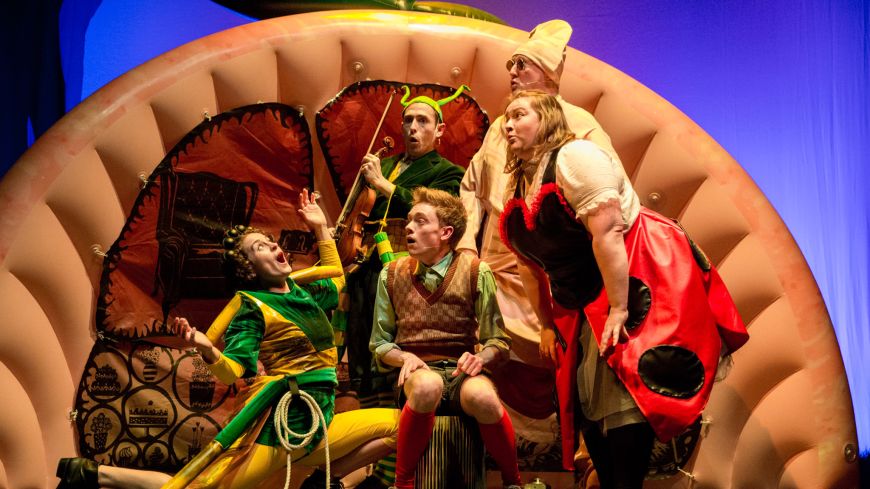 Sell A Door Theatre Company presents a canty, if scanty, rendition of Roald Dahl’s James and the Giant Peach.

There’s a peach-shaped house claiming centre-stage as the curtain rises. It could have landed straight out of the pages of a fairytale - which in a way it has. This is James’s giant peach and he begins his story at the end – a topsy-turvy twist of which Dahl would no doubt approve. James now lives in the giant peach, with his giant creepy-crawly friends, in New York’s giant Central Park, and together they show us just how they got there.

The bit about James being orphaned when his parents are ravaged by a rhino while out shopping in London is, quite rightly, quickly brushed over. Sent to live with his revolting Aunts, fat Sponge and skinny Spiker, he endures hardship and humiliation, until a bit of magic renders the eponymous fruit and some nearby garden bugs simply enormous. James and his ginormous critter collective escape inside the prodigious peach, enjoying a torrid trans-Atlantic adventure that sees them finally finish where they started.

Delivered in full-on, child-friendly fashion (there’s even a bit of audience participation) it goes at quite a lick. The cast attack their roles with great, if at times a little too much, energy but where they really excel is in the singing, with some gorgeous close harmonies coming across particularly well.

Compared to a couple of recently viewed big-budget musicals adorned with many bows and whistles, this does appear a bit low-rent by comparison. There’s quite a bit of ‘filling in’ business to cover the fact that just about everyone’s playing dual roles and so keep running off to make a quick costume change. The peach, though magnificent and multifaceted, is just about the only bit of set they’ve got. There’s a couple of miserable cut-outs that are supposed to look like the Aunts splatted on the side of the peach. They really don’t, and one can’t help feeling that a bit more effort could have been made.

However, despite the cast, set and script being a bit on the lean side (the total performance time is just one hour) the production is thoughtfully put together and, judging by the audience reaction, the younger kids love it.