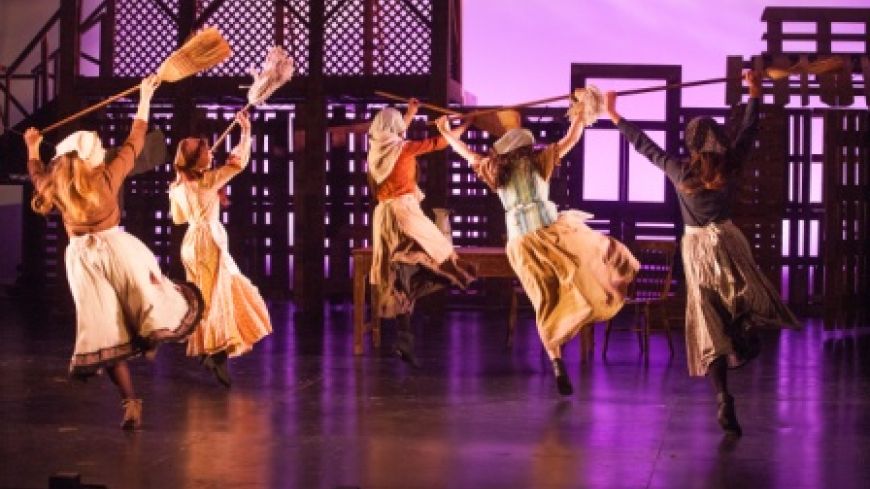 Edinburgh Music Theatre presents a Fiddler on the Roof that could give most professional companies a run for their money.

Based on the stories of ‘Tevye and His Daughters’ by Sholem Aleichem, the backdrop to Fiddler is a Jewish settlement in the fictional town of Anatevka, in early 20th Century Russia. In the social and political upheaval leading up to the Russian Revolution of 1905, a series of anti-Jewish movements called ‘pogroms’ saw Jewish families attacked and forced out of the small towns and villages that they had worked hard to make their home. It is within the context of this crisis that we follow the tale of Tevye, his family and community.

The story centres on Tevye and wife Golde’s preoccupation with finding suitable husbands for their eldest three daughters. Tradition dictates that the local Matchmaker may propose appropriate candidates, but it is the Papa who will ultimately have the final say. However, times are changing and Tevye’s daughters wish to marry for love and thus choose their husbands for themselves. The tension of generational conflicts, of change versus continuity, of what to hold on to and what to let go, sits alongside the themes of repression and prejudice in this magical musical that, at its heart, asks the question of what it means to ‘belong’.

Right from the off it is clear that Edinburgh Music Theatre has a talented cast. As their voices rise together during the opening musical number, ‘Tradition’, it sets off a tingle down the spine. There are some fine individual performances: Libby Crabtree’s Golde, Sally Pugh as Tzeitel, Asley Grandison’s Hodel and Katie McLean as Chava are convincing and effective both emotionally and vocally; and Alex Kantor is a charismatic Tevye who pulls this fine production together with a towering performance full of pathos and humour.

The unadorned set of a wooden staircase with balcony, providing space for the barn-like homestead beneath, is built with wooden slats that allows the changing light to shine through, casting shadows and silhouettes across this deceptively simple design that infuses it with atmosphere. During the company’s rendition of ‘Sunrise, Sunset’, the light filtering through morphs from oranges to purples, creating an effect that is both powerful and poetic.

There are some who carry off the generic East-European Jewish accent better than others and a couple who struggle to find the key when singing solo. However, to make a first act of 90 minutes duration feel like 40 and to pull off the choral numbers to a standard that would make Gareth Malone proud, you have to conclude that they absolutely nailed it. Great stuff.