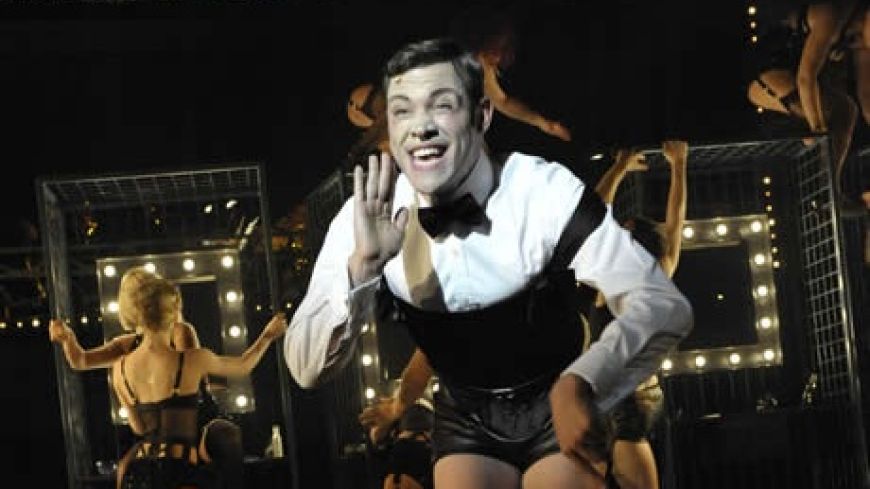 In the early 1960s, it was an inspired idea to adapt the stage play, “I am a Camera” based on Goodbye to Berlin, the travel memoirs of Christopher Isherwood, into a musical.

After Kander and Ebb created their smash hit on Broadway, (8 Tony awards), it then became a major Oscar winning movie starring Liza Minnelli.

Timely then to revive the stage musical with a fresh interpretation of Isherwood's intimate observation of people, culture and politics during the rise of Nazi Germany.

With sparkling energy and slick choreography, we join in the carefree nightlife at the Kabarett. The effervescently camp Emcee is captured by Will Young with a white powdered and rouged face, corset and leiderhosen.

As a clown, a conjurer of tricks, he is the sly smiling showman at the decadent Kit Kat Club. Joining him centre stage is the star singer, the bob haired, mad cap girl, Sally Bowles.

The character of Sally was based on Jean Ross, an English cabaret singer whom Isherwood met at Fritz Wendell’s flat in Berlin in October 1930. Fascinated by her clothes, green finger nails and eccentric manner, he then goes to see her perform at a cabaret club, The Lady Windermere.

“She had a surprisingly deep, husky voice. She sang badly, without any expression, her hands hanging down at her sides – yet her performance was, in its own way, effective because of her startling appearance and her air of not caring a curse of what people thought of her.”

Leave any memory of Minnelli behind. Siobhan Dillon (from BBC series, How do you solve a Problem like Maria), oozes her own style with cool and calculating confidence – but perhaps a little too brash at the start?

From the original story, Sally is insecure and desperate for love, jumping from one affair to the other, her “restless and nervy” nature hidden by her addiction to gin, cocaine and wild behaviour.

We don’t quite get under Sally’s skin here to spot any vulnerability, but that’s just a small quibble. Dillon takes on the role with a feisty spirit and sings the romantic ballads (such as Maybe this Time), from the heart.

She is well partnered by Matt Rawle as the quiet American, Cliff Bradshaw (i.e. Isherwood), who is completely seduced by the impulsive and reckless Sally. He just cannot say no to her, while he tries to work, writing his novel and teaching English. Meanwhile she is oblivious to the changing anti-semitic society around her.

In contrast Fraulein Schneider is well aware of how the life of Herr Schultz will soon be changed for ever. Lyn Paul portrays the landlady with gentle grace as she decides her fate.

The orchestra sits on a platform backstage, while sliding walls and beds move between quick changing scenes from nightclub to apartments. All the well known songs, (Money, Cabaret, Mein Herr, Tomorrow Belongs to Me) are performed by the cast with appropriate satirical humour or powerful emotion.

Will Young leads the company with wicked, witty charm from the rousing Willkomen through the dark mood of the narrative to the dramatic finale. This is a brave, shocking vignette to end the show with an emotional punch.