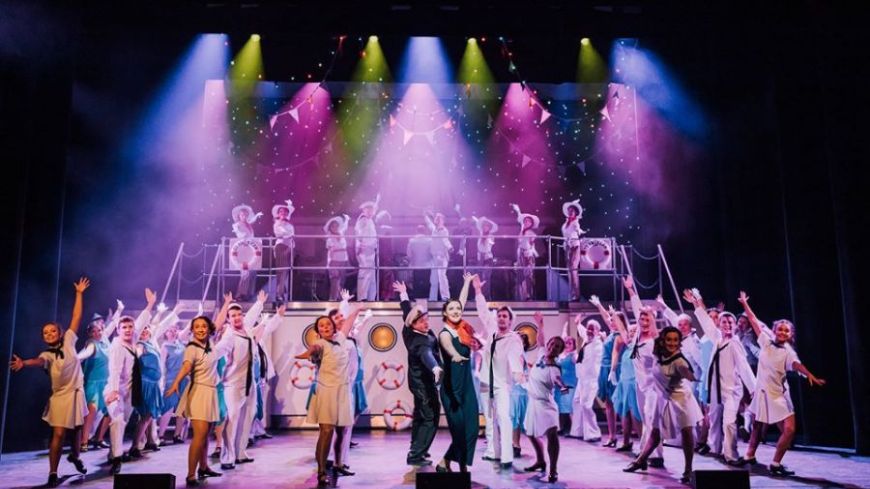 “There's no cure like travel, to help you unravel the worries of living today. When the poor brain is cracking, there's nothing like packing a suitcase and sailing away”. Cole Porter.

Planning just such a transatlantic getaway are a motley band of passengers, each with a reason to escape on the SS America.

In Cole’s Bar in Manhattan Elisha J Witney is making last minute arrangements, issuing orders to Billy, his broken-down broker assistant, leaving him with some insider dealing and the job of delivering his forgotten passport to the ship.

A simple job for Billy; what could possibly go wrong?  Well gangsters, stowaways, love triangles, disguises and mistaken identity, a blackmail plot, rumours of icebergs, secrets and some very tricky decisions.  All aboard!

Billy has gone overboard for young debutante Hope Harcourt and, while he thinks she is hopelessly out of his league, when he spots her on deck he just can’t jump ship.  Hope is travelling with her mother, who is seeking better financial prospects by marrying her off to Lord Evelyn Oakleigh.

Their Depression Era fellow travellers are hoping for some big celebs to lift their spirits, but with no big names, it’s down to nightclub singer Reno and her band of Angels to set the mood. There is also frisson at the rumour of “Snake Eyes Johnson”, public enemy number one being onboard, although in reality Moonface Martin is a third-rate gangster (rated at No. 13).

These disparate characters soon find themselves all at sea in a madcap, farcical romantic comedy.

First brought to the stage in 1934, like most musicals of the time the characters are fairly two dimensional and the plot well worn, but the music is timeless, bringing us the classic numbers "I Get a Kick Out of You”, "You're the Top," and, of course “Anything Goes”.

Vocal performances are strong throughout. Toni MacFarlane in commanding form as Reno and the others step up to the helm when allowed; Tanya Williamson unleashing Erma’s full Marilyn Munroe as moll and ship’s siren; Kerr-Alexander Syme having great fun releasing the inner gypsy from his bumblingly charming Lordship and Peter Tomassi bringing Marx Brothers levels of silliness.

Dance is also a major part.  There are some early nerves, a turn to starboard instead of port and some awkward lifts, but it’s ambitious and the big stage filling numbers dazzle. The production’s energy is a little choppy and there could be more spark between Billy and Hope but there is plenty which is delightful and de-lovely.

Great escapism from the worries of living today.