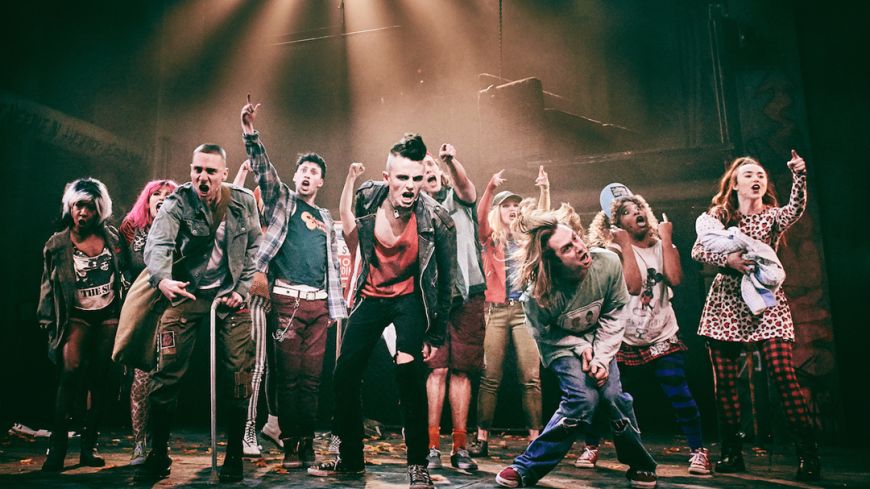 There is no faulting the music to American Idiot. The original concept album by Green Day has won awards and accolades since its release in 2004 and seemed a perfect package to bring to the stage, receiving the 2010 Grammy Award for 'Best Musical Show Album' following its Broadway premiere.

There is plenty to fault in the presentation of this 10th anniversary tour however, which feels like an incoherent mismatch of clunky transitions, that don’t marry with the punk ethos at its core, creating a cringe that creeps in at the beginning and intensifies as the show goes on.

We follow the journey of three disillusioned small-town friends looking for meaning post 9/11 – Will’s trapped in suburbia having knocked up his girlfriend, Tunny joins the army, and main protagonist Johnny highlights the debilitating effects of addiction to escape the numbness of reality.

Johnny should be a great character. He’s the central point to try and assemble meaning from the various situations presented, while simultaneously battling his drug alter ego, trapped in a paradox of caring too much and not caring at all, but there’s a lack of coherency or authority in the delivery, highlighting the general missed opportunity of this production.

Performances overall were awkward, and with minimal dialogue in a high concept visual show, it’s crucial we hear those lyrics, but mumble mouth was prominent, with by the number clichéd choreography that no longer retains any of Steven Hoggett’s original dynamism of characterisation.

The Playhouse is a big, grand space at odds with the intimacy that’s needed to feel any connection or empathy, with frustrating decisions on what to focus on in minute detail and what to whizz through or badly position in a flurry of activity.

But these faults lie in the original concept, and Racky Plews’ production cannot be faulted for lack of trying, with the dynamic young cast giving their all, with minimal harmonic clangers and overall impressive vocals for the majority.

It’s a jarring mix of passion packaged badly that leaves you disconnected and awkward… just like the “the waiting unknown” as presented onstage, but rather than utilise this for effect, it feels more like a shrug of the shoulders with the splintering heart grenade motif – the heart of the show – never at risk of detonation.