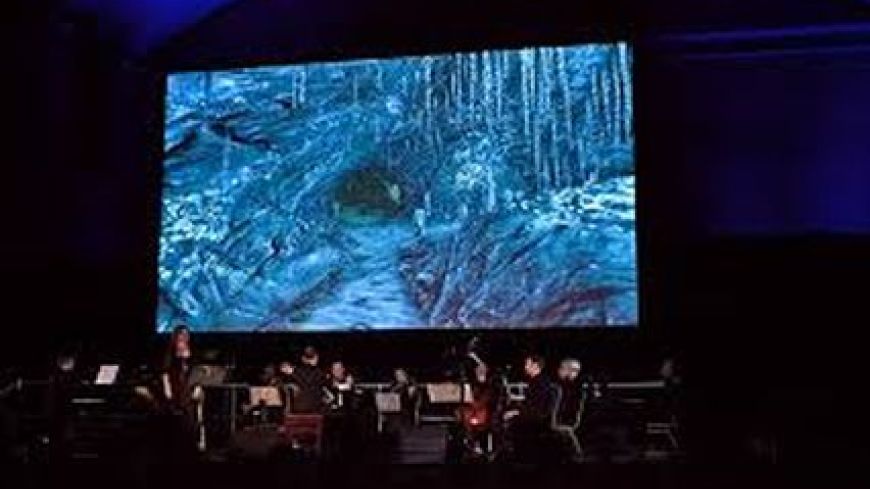 “Dear Esther. I sometimes feel as if I’ve given birth to this island. Somewhere, between the longitude and latitude a split opened up and it beached remotely here.”

Washed up on a deserted Hebridean island we follow in the footsteps of a seemingly doomed man. It’s a mysterious narrated journey that explores the connections between a car crash on the M5 and his tortured, descent to madness and possible ascent to rebirth.

This is a performance of the video game, Dear Esther with live narration and musical accompaniment. The game was first developed from a mod of Half-Life 2 in 2008 and launched as a separate entity in 2012. A genre defying experimental piece of visual story telling it has engendered debate as to how much it is an interactive “game” as such, abandoning traditional gameplay for atmosphere and art.

The score rises from the crashing waves and howling wind as the camera pans to the interior of the island, its lighthouse and far-off beacon acting as waypoints to discovery. It’s a fragmentary journey, narrated in a sort of Dadaist poem which allows the audience to share a fractured understanding of the main character. The island takes on a sense of physical space, a backdrop for abstract storytelling with a hint of magical realism.

In front of the giant screen the music by BAFTA winning Jessica Curry is performed by a quartet, soprano and pianist. It forms a powerful but stark soundtrack, steeped in Scottish folk tradition which strengthens the immersion in the landscape and events. The element of live performance allows for subtle changes and responses between the artists.

To the metronomic sound of footsteps we look for hidden parts of the story intertwined with the video and music. The game has been described, rather reductively, as a Walking Simulator as it eschews elements of traditional gameplay. Here the gameplay is stripped away further by the lack of interaction leaving the sense of immersion. While the paths are somewhat linear, the dreamlike narrative and painterly impressionistic artwork allows space for contemplation of what it all means. With twisting turns the script and landscape offer up semi-religious imagery and we are left to wonder what is real and what is only a journey through the inner self.

The beacon of the mast is a constant focus, drawing our traveller on his own road to Damascus and a symbolic struggle with guilt and redemption. The sense of narrative with its themes of disease, loss, death and rebirth is less important than moods and feelings that it invokes along with the unsettling tonal changes. The chilly soundtrack goes from isolating to epic as the lines converge and climb to a climax of a possible point of no return.

Since the game was launched recognition of the importance of live film soundtracks has grown and the work aims to put video games on a similar footing. Over the same period the viewing of games has also evolved. The Twitch streaming platform was born out of a performance art venture and has gone on to have viewing figures to rival mainstream broadcasters such as CNN with over two million channels. It has shown that there is a desire for the communality of the shared experience. The decision to perform the work in major concert halls is timely.

The production is slick both artistically and technically, with flawless performances. While open to interpretation much however remains hidden and as an audience, rather than a player, we are removed from interaction and the exploration and reward that gameplay brings. It is a meditative and haunting experience which has been as lovingly created as the original game, but the minimal framework struggles slightly to support it as a pure performance piece.