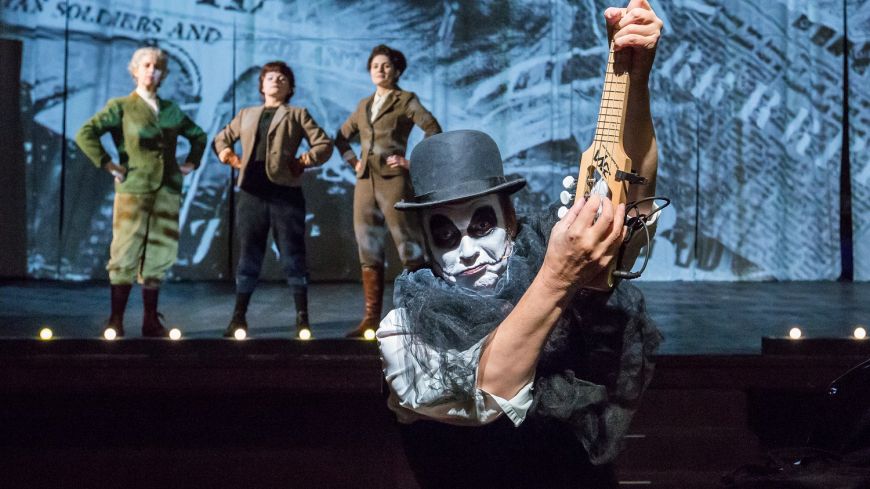 On the most poignant of remembrance days of the 1918 Armistice, 11th November 2018, a powerful anti- war play opened at Leith Theatre.

This world première of Viennese writer Karl Kraus’s epic satire The Last Days of Mankind, written at the time of the so called Great War, is a pan European production and the play’s first full scale major production in over 20 years.

In a stroke of genius, the fabulously dark thread of the Tiger Lillies is strongly woven through the script as their lead singer Martyn Jacques narrates and sings, with a wonderful cynical sneer, the songs, inspired by the work of Kraus, that he composed for the show.

The front part of the auditorium has cabaret style seating in an attempt to create a sense of fin de siècle Vienna and impressive joint direction from John Paul McGroarty and Yuri Birte Anderson allows full use of the theatre’s space as actors invade aisles and balconies.

The lines of John Donne’s poem For Whom the Bell Tolls are projected on to the curtained stage before this epic begins then heavy bell tolls signal major scenes referencing the deeply humanist quote. Simple curtains act as backdrop to a series of impressive and pertinent projections that include a hint of fellow Austrian artist, Klimt.

The superb cast, who are fittingly frae aa the airts o Europe that featured strongly in WW1, add multi -national and multi voiced credence and relevance to this vital piece of theatre. They create beautifully shaped tableaux that are full of stylised, elegant physicality as well as the buffoonery of staccato moving marionettes that embody the both subversive and the absurd.

At first, some speech is a little inaudible and maybe the screen prompt should have been at the side of the stage as well as at the back. While some scenes are equally incomprehensible and shocking at times, they are nowhere near as outrageous and incomprehensible as the subject they satirise.

Kraus used contemporary sources to compile his ‘docudrama’, including overheard conversations and other contemporary sources, such as the crossed wired letters between a husband and wife, a method that can hold more power than a polemic and was used during WW2 by Sicilian writer Elio Vittorini. Kraus’s original text “…would stretch out over 10 days …” and 3 ½ hours makes for a long time in a theatre but the war was also long so it pays to heed the Leith motto of ‘Persevere’ and get the full value of this highly relevant work.

While it’s doubtful if theatre makes deep differences to how society is run, any counter voice still matters as it says that some of us are not buying the lies; not joining in. In our own times of uncertainty, this important vehemently anti -war production, that has chants from the past that echo with a chill note today, is a vital affirmation of co-operative European Theatre.