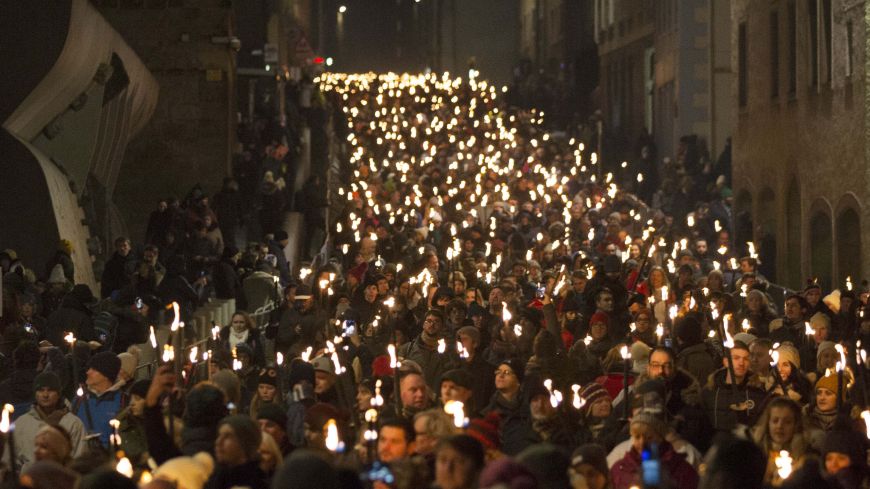 Edinburgh’s Hogmanay has revealed ten pipe and drum bands will be taking part in this year’s Torchlight Procession.

Thousands of torchbearers will walk from three points of the city to Holyrood Park to form a giant outline in flames of two people reaching out a hand in friendship. The image reflects the ‘Be Together’ theme of this year’s Hogmanay festival.

“House band” The Torches, and guests Clanadonia, will then take to the stage in Holyrood Park.

The event, which organisers expect will attract 40,000 people, will finish with a firework display from Calton Hill at 9pm.

Clanadonia are often seen beating their big drums on the streets of Edinburgh. The group’s  pipe-and-drum music has also featured in Outlander and they’ve played major events from T in the Park to the Opening Ceremony of the Glasgow 2014 Commonwealth Games.

As previously announced, 40-strong, fire-brandishing clan PyroCeltica will be leading the torchlight procession down the Royal Mile outside St Giles, with a pounding backbeat provided by Edinburgh’s Harbinger Drum Crew.

Other bands announced, include both traditional and contemporary styles:

Tickets are still available for the Torchlight Procession. They are £3, or £14 for those who’d like to carry a torch, with 50p from each ticket donated to the charity OneCity Trust, which works to fight inequality and exclusion in the City of Edinburgh.

“Once again, the sight of the Torchlight Procession will provide a breath-taking start to Edinburgh’s Hogmanay,” said Lord Provost Frank Ross, who is also Patron of the OneCity Trust.

“It’s a real privilege to lead the 40,000-strong procession along the Royal Mile to the beat of pipes and drums, ending with a fireworks finale in Holyrood Park.  Last year’s event resulted in an incredible donation of £30,000 to the OneCity Trust and I’m hoping we can look forward to even more funds being raised this winter.”