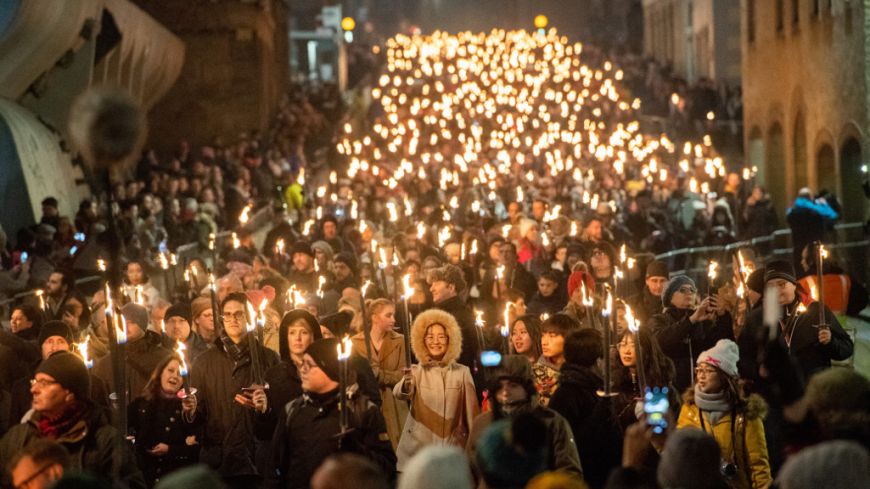 The three-day Edinburgh’s Hogmanay Festival 2019/2020 embellishes the tried-and-tested formula with a mix of ceilidhs, concerts, and a DJ heading up the concert in the gardens for the first time. The Hogmanay celebrations start earlier on the 31st and continue later into the wee, wee hours of the 1st. 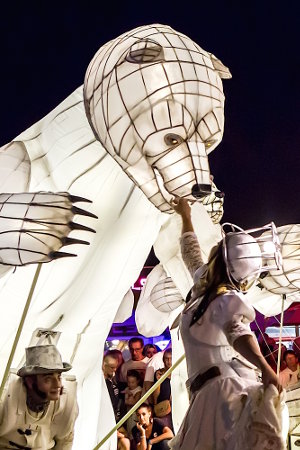 As has become tradition, the festival kicks off on the 30th December with the iconic Torchlight Procession. Thousands of torchbearers, pipers, drummers and fire performers will create a river of fire down Edinburgh’s Royal Mile as they process to Holyrood Park. In Holyrood Park, torchbearers will play on this year’s “Be Together” theme by creating a huge image of two people joining hands. Bands will entertain the crowds, with the night climaxing with a fireworks display.

The big event of the festival, now in its 27th year, is the Edinburgh’s Hogmanay Street Party on the night of the 31st. Around 70,000 revellers and an international and scottish flavoured line-up of street performers will take to Princes Street including Circus Alba (Scotland), Compagnie Remue Ménage (France), Close Act-Theatre (Netherlands), Dundu (Germany), Avant Garde Dance (UK) and Gandini Juggling (UK)

Ronson, the first ever DJ to headline the (separately ticketed) Concert in the Gardens, will create a new soundtrack to accompany Midnight Moment fireworks from Edinburgh Castle.

For families, Bairns Afore returns in the early evening of the 31st December, with children’s TV duo Dick and Dom battling behind the decks to see whose tunes are best.

The 60-minute musical battle culminates with fireworks at 6pm, giving parents time to take their children home to bed before the late-night revelling gets underway. 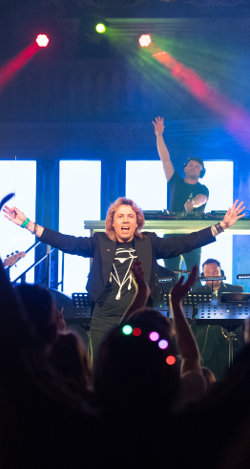 The McEwan Hall hosts a series of Hogmanay events over the three days of the festival, opening with Symphonic Ibiza, where DJ Andy Joyce and a live 20 piece Scottish Pops Orchestra put a new spin on famous Ibiza club anthems on 30th December.

In a new addition to the Hogmanay Festival line-up, on 31st December, G’Day 2020 will be celebrating the arrival of the New Year in Australia at 11.30am with soul singer Kylie Auldist.

Ronnie Scott’s Big Band in Concert featuring Liane Carroll will later keep things grooving til around around 10pm when concert-goers can join the Street Party if they wish.

For those still going strong after The Bells have fallen silent, there’s now an Edinburgh’s Hogmanay Official Afterparty, with a late-night set from international music producer and DJ Judge Jules.

The popular Ceilidh under the Castle event returns under the shadow of Edinburgh Castle with ceilidh bands Sleekit Beasties, Skyte! And Cool Ceol Ceilidh Band keeping the dancing going.

The Candlelit Concert in St Giles’ Cathedral is also on the 31st December with a baroque theme including Bach’s Christmas Oratorio and Vivaldi’s Dixit Dominus.

For those mad enough to take an ocean dip on the 1st, the Loony Dook takes place again at South Queensferry on the first day of 2020.

Meanwhile back in Edinburgh, Eddi Reader plays a closing concert at the McEwan Hall on 1st January.

There is also a First Footers Family Ceilidh, a free of charge Ceilidh at the McEwan Hall from 11.30am on the 1st.

Writings on the Walls

The Hogmanay Festival then lingers on until Burns Night on 25th January with Message from the Skies. Newly scripted letters are projected on buildings across Edinburgh from acclaimed Scottish authors, including Charlotte Runcie, Irvine Welsh, Kathleen Jamie, Kayus Bankole and Robin Robertson. The project is a co-commission with Edinburgh International Book Festival. The writings will take their theme from Scotland’s Year of Coasts and Waters.

Alongside the main project, Edinburgh’s Hogmanay will run a competition for schools, offering schoolchildren the opportunity to contribute their own letters, with four winners seeing their work writ large in their home city for an hour before the main project goes live each evening.

With organisers of major events increasingly sensitive to the carbon footprint of invading hordes, Hogmanay organisers are encouraging visitors to “be green” by purchasing carbon offsets.

They say 160,000 attended events over the three-days last year.

Tickets are on sale now at www.edinburghshogmanay.com. Find out more about Edinburgh's Hogmanay.