My Lover Was a Salmon in the Climate Apocalypse, Pleasance Courtyard, Review 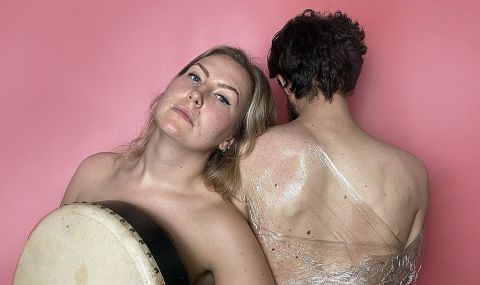 It’s always interesting to see how artists find new ways to tackle the difficult subject of climate change and ecological devastation, in a way that’s not overly depressing or hectoring. Combining reportage with personal revelation, as in journalist Alanna Mitchell’s Sea Sick, or packaging your message in punchy rhymes like Baba Brinkman’s climate rap have proved effective tacks.

This is definitely different. The title suggests that in “My Lover Was a Salmon in the Climate Apocalypse” from Irish gig theatre company Bradán (the word translates in Irish to salmon) we are in the realm of an absurd ecological confessional. We are, but initially on entering the small “Green” theatre at Pleasance Courtyard, you find a trad irish folk trio playing a jolly foot-tapping tune. A barman pouring Guinness is all that’s missing.

Switching from musical numbers to drama, twentysomething Fin (Rory Gradon) and Fi (Elinor Peregrin), on guitar and bodhran, explain matter-of-factly that they are lovers in a band. The third band-member Sam (Elisabeth Flett) on violin and recorder provides mostly soundtrack.

Fin, we learn, has what might be described as an obsession with salmon, and is angry over what we have done to this essential species (warming and acidifying oceans are bad news for these cold-water fish). There is much railing against humanity of the “we’re shit” variety, with segues into the horrors of fish farms, over-fishing, and, more interestingly, how biologically similar we are to salmon.

Things start going weird when Fin announces to his fellow band members that he’s a fish and that he’s going to travel back in time to prevent humankind evolving from fish. In one scene with his "mammy", he talks to a piece of fish in a styrofoam packet from Tesco.

Musically the trio are accomplished, particularly Flett’s effects box soundscapes and jaunty fiddle and recorder-playing and Peregrin’s husky vocals. James Ireland’s script manages to avoid talking too much from the ecological soapbox, even if the result is quite bizarre, but credit is due to any theatre company that manages to have its audience happily singing along “Anyone of us could have grown up to be a fish!”