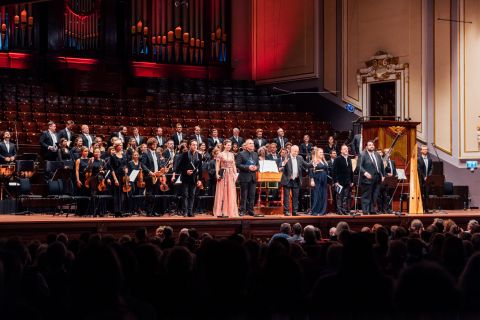 Handel’s epic oratorio majestically narrates the famous biblical drama, which would have been so familiar to his original audiences. Tonight’s performance gave us just the right balance between colour and nuance, with both chorus and soloists retelling the tale, inhabiting the full spectrum of emotions that the plot requires.

Neal Davies was a superb Saul, capturing so well the oscillating emotions of the increasingly unstable king.  Of course, this was always going to be a part which risked being overshadowed by the amazing countertenor Iestyn Davies, playing David. For sure, Iestyn’s resonant voice filled easily even the Usher Hall – his performance throughout was magical, even hypnotic. But back to Saul himself – there was something special here too; of particular note were the subtle but notable interactions between him and Andrew Haji, cast in the role of Jonathan. It made all the difference. Although this production never aspired to be anything like as theatrical as other adaptations (such as at Glyndebourne in Sussex), it would have been nice to see a little more modest interplay, like this, between some of the other principal parts.

John Butt had been brought in to cover as conductor, fairly last-minute – but was, inevitably, utterly accomplished. The composition of the orchestra was one of the broadest and innovative that Handel employed; it was particularly pleasing to hear the carillon given full prominence, and the chamber organ provided delicious colour – though its siting blocked our view of some of the other musicians.

The Choir of The English Concert were solid and assured, their number just right for what they needed to do. It was good to see some given greater exposure, coming forward to fill the more minor parts, as and when required. The ominous appearance of Samuel, upstage right (played wonderfully by William Thomas), was an inspired and imaginative touch – Samuel having been summoned from the dead by the Witch of Endor, to offer counsel again to Saul, having been his earthly mentor and guide.

Of course, this is in essence a story about envy and split loyalties, the intricacies of love, and the pursuit of personal agendas – where sometimes no-one comes out entirely smelling of roses. To that end, it is just as relevant today, as ever.

The performance finished at 10.15pm.