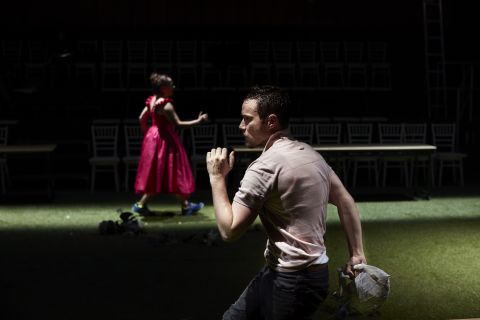 The premiere of Midsummer – a play with songs in Autumn 2008 at the Traverse Theatre was a magical, romantic comedy about Helena and Rob sharing a lost, drunken weekend, without a fairy tale ending: “You and I are not going to live happily ever after and this ship is not sailing into the sunset. Is that clear?”

Ten years on and time for an updated version of Midsummer now revised and adapted for a cast of four actors and three musicians. Once again we meet Helena and Rob, now in their sixties, reminiscing on that first night, their chance encounter in an Edinburgh pub. The vast vaulted theatre at the Hub is transformed into a venue for a Wedding reception, a long white linen draped table laid with champagne glasses, flowers and balloons, surounding a garden lawn. Time to celebrate.

David Greig's dialogue is sharp, snappy and witty, occasionally using novelistic third person text to describe the scene and inner feelings. The narrative is at first related by Older Bob interspersed with dramatised time travelling scenes by the two characters as they were and are now, past and present.

The ghosts of their younger 30-something selves emerge from the shadow of memories, minds and hearts as Helena and Rob re-enact the events of what happened over the summer Solstice, a time of youthful, wild abandon; or as much as they can recall, their hazy recollection akin to the Lerner-Loewe song I Remember it Well

Girl meets Boy: Helena, a successful, single divorce lawyer is sitting with a bottle of New Zealand Sauvigon Blanc waiting for her (married) lover at Whighams wine bar. He is late then cancels their date. Her name sake in Shakespeare’s pastoral comedy emphasizes the capriciousness of love and its excesses, making a fool of herself by pursuing Demetrius with an infatuation as if caught under a spell. In this modern urban parody, Helena swallows her pride at being stood up by approaching Bob, (an insecure, inefficient petty criminal), who is reading Dostoevsky to cheer himself up. “Is this seat taken?” she asks him, “I’ve got some wine here.. would you like to get drunk with me tonight?”

And so they drown their respective lonely sorrows where a bottle of wine or two leads to a flirtatious fling, a one night stand and a weekend of adventures around the Capital from the West End to Leith Walk, Sighthill, (for £15K in a Tesco bag), Oddbins (for supplies of champagne & whisky), a Nightclub, a Wedding to a suite at the Balmoral hotel. Think of a movie mash up of One Day and Trainspotting.

Unfortunately, rather than transforming Midsummer into a rock opera, the addition of a Band to perform a live performance of music and song, plays second if not third fiddle to the drama. Centre stage the actors throw themselves headlong into whirlwind of crazy capers, racing around and climbing ladders with pantomimic farcical fashion.

In the original show, like a mini-musical, the simple intertwining of the poetic lyrics and dialogue carried the story along as a charming, intimate duet between the two lovers, accompanied by the soft strumming of a guitar.

As a neat analogy, when A Midsummer Night’s Dream was adapted in 1816 into an Opera by Frederick Reynolds and Henry Bishop, the eminent theatre critic William Hazlitt was far from impressed:

“ All that is fine in the play was lost in the representation. The spirit was evaporated, the genius was fled .. but the spectacle was fine… ”

Towards the end of Midsummer, thankfully, the mood softens, the tempo slows to appreciate the heartfelt words of the song: “and we go down to the Old Town, you and I through the Old Town and we wish we were young again and slowly fall .. and fall in love again.”