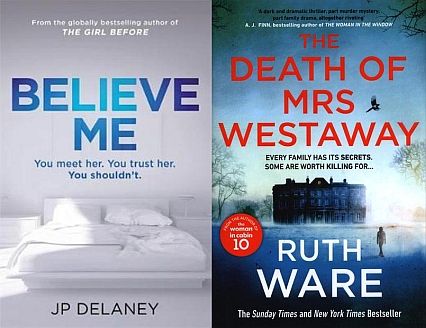 This event brought together two global best-selling writers specialising in suspense, intrigue and murder. JP Delaney’s latest novel is Believe Me while Ruth Ware has just published, The Death of Mrs Westaway.

Introduced by Al Senter, he explains that the title of this discussion links their two heroines who both lead a double life when forced to take on a secret identity to search for the truth.

JP gives an outline of his plot in which a British drama student in New York City earns money by working undercover to trap unfaithful husbands as a decoy for a Divorce lawyer. But this dramatic role-playing soon leads her into a murder mystery and a dangerous entrapment in order to assist the police. He explains how in today’s society of fake news and social media, there is the opportunity for duplicity and pretence. The letters LIE are hidden within the word Believe.

Set in Brighton and Cornwall, Ruth Ware’s character Harriet receives a letter from a solicitor in Cornwall stating that she has inherited a substantial estate from her recently deceased grandmother. While she knows this must be a mistake, she is desperate for funds to pay a debt, and decides to use the opportunity to defraud the family.

After readings by both authors, Ruth reveals that the setting of Trepassen House, Cornwall is loosely based on Manderley from her favourite novel, Rebecca by Daphne du Maurier. The elderly housekeeper also shares the haunting presence of Mrs Danvers. Having worked in NYC, JP wrote about places he knew here but also used Google Maps to research the location around Columbia University to describe it as accurately as possible.

Both writers discuss their manner of plotting whereby the narrative might come from a spark of an idea which then takes off perhaps taking a different direction. Ruth likes to fill the story with clues for the reader to unravel, Agatha Christie style, and then tie it all up neatly at the end. JP is interested in the puzzle element, the predicament of the characters to accelerate the action.

His American Editor is very hands on, reading drafts, suggesting changes and corrections - having to write eighteen endings until one was accepted. Ruth has a different experience from her British Editor who polishes her manuscript until it is ready for publication. She also has an American editor who may have different transatlantic opinions. (This may explain the curious spelling of whiskey, served after dinner at Trepassen House!?).

A final question about TV and Film rights: while several of their crime novels have received Options, Ware and Delaney both appreciate that the adaptation from page to screen can take a great deal of time and funding.

Having read these and their previous novels, here are two highly recommnended writers of well-crafted crime fiction.