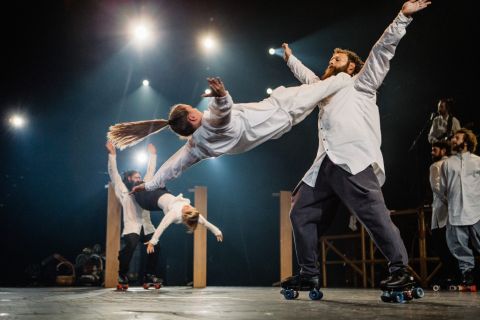 This is no ordinary circus show, though acrobatics and a whole multitude of circus skills are the heart of the show. Montreal-based Circus Alfonse blends elements of dance, theatre, music and visual comedy in a sometimes affectionate and sometimes sardonic critique of Quebecois culture, in particular the role of the church. Like many of the worst profanities in francophone Canada, the title derives from the Catholic church, here the word “tabernacle”.

The audience enters onto a stage strewn with what looks like Quebecois paraphernalia (hockey sticks, snowshoes, cross country skis, etc). The 10-strong troupe, all dressed in chefs aprons, lounge about the stage knitting and crocheting. From this curious opening the action moves into a mock hockey game, a foot tapping in the pews number, and ratchets up the excitement with a series of impressive old-school acrobatic routines, given a twist. The acrobats climb handheld poles, swing each other by the legs while roller skating, do flips on raised logs, and swing incense holders to great effect.

Interesting facial hair seems to be a requirement for the male acrobats, as well as an ability to leap 25 feet into the air off a flying swing, do a somersault and land on a moving mattress.

One is quickly struck by the way Cirque Alfonse’s acrobats interact. They have an easy, deliberate movement and poise, but you can also see in their eyes how they are fixing their concentration when about to perform a tricky acrobatic feat. They always end each routine with a nod to each other as if to say “thanks for being there”.

There’s confidence, but it stops short of swagger. There’s no room for error when people are doing trust falls from great heights or scaling up human pyramids three people high. All without nets, of course.

Watching live acrobats of this calibre is not the same as watching on television or YouTube. The synchronicity and physical grace is that much more awe-inspiring - and the tension palpable.

There’s little to no dialogue and those few scenes are least memorable - a scene where horoscopes are read from a pulpit comes to mind. But there is an excellent folk/rock band on a raised platform at the back, consisting of fiddle, keyboards, guitar, and drums which keeps things thrumming along. There are also musical numbers in French which work as lively, scene-changing transitions before getting back into the acrobatics.

The show as a whole doesn’t hold together as well as it could, but it didn’t seem to matter. By the end the crowd were on their feet, applauding and cheering.