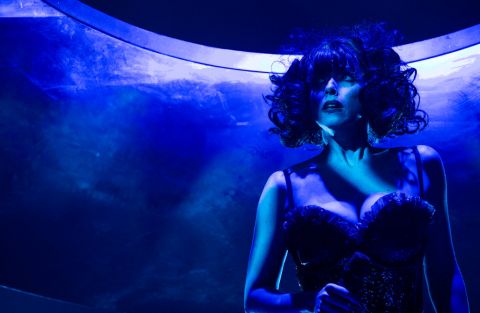 This is the Little Mermaid as you have never seen it. The original Anderson tale of 1837 is, a Meow Meow points out, of its time. Staggering on stage amidst thunder and lightning, dressed in two fur coats and bawling her eyes out, Meow Meow declares ‘This is a show about happiness!’

Instead of a fairytale, Meow Meow warns us that it will be a submersion into her deep consciousness, complete with cobwebs, bits of fluff, and odd relics of her past relationships. This is what it’s about - love, the pursuit of it, the lack of it, and the somewhat shaky belief - as she hears her own ticking body clock - that it still exists. This is the Little Mermaid at a midlife crisis… and it is genius.

As the Little Mermaid’s voice is an important part of the tale it is appropriate this involves some fabulous vocal numbers. The soundtrack is original and delicious with The Siren Effect Orchestra delivering fantastic music.

This is musical cabaret at its absolute best; a perfect combination of sass, laughs, and velvet vocals while indulging the ambience of late night decadent entertainment. Meow Meow is instantly everyone’s favourite showgirl and breaks no sweat in carrying an eighty minute performance almost single-handedly. Her physical stage presence is second to none as is her prowess for double-entendre.

At first it may seem that the connection between the title and what is going on on-stage is strenuous however it becomes clear that this 19th century fairytale is the perfect frame for Meow Meow’s modern interpretation.

In an age of Tinder and speed-dating, it is so relatable to hear her relationship history and come to the hilarious conclusion as to what she should do about it. This continues until, of course, the prince in disguise is literally dangling in front of her. Chris Ryan does a fantastic turn - as the man in question - and is thoroughly enjoyable as her dream man.

Meow Meow is fabulous, and the show is perfection. With flippers, several fish-tails, and an awful lot of bubbles, there’s little not to love.