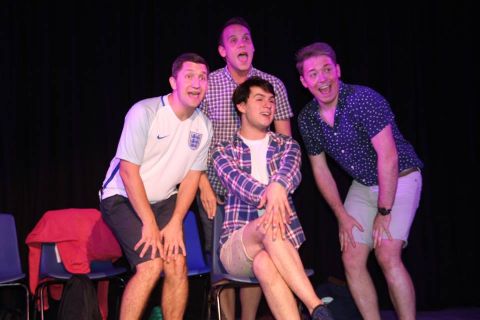 American Pie-British style reflections on a holiday misspent? Departure Lounge is situated in a Spanish Airport with four English lads (supposedly teenagers) talking about their wonderful holiday of sun, sea, alcohol and of course sex. If you are offended by crude references and their attitude to girls then this show is not for you.

As delay follows delay (lots of gags at expense of one well-known Irish airline) the memory or lack of it about what happened on a specific night start to return with consequences for the group and their friendship.

Homophobic references abound, then rebound, and one of the four lads, of course, has to be a virgin and is the obvious target for this trip away.

There is an additional member of the cast in the shape of ‘Sophie’ who becomes central to what has gone on with the Lads. The Group are at the age of awaiting ‘A’ level results and seem to come from middle-class backgrounds whereas ‘Sophie’ comes from the working class.

The performances of all the cast are really excellent and the show is full of life, song and movement and if you can get past the ‘reality’ show material, the story has hidden depth looking at relationships and group dynamics.

There is an overbearing leader who has funded the holiday by dubious means, the star stud, the virgin, and the guy in the football top who is not seen as the sharpest knife in the box.

The show deservedly attracted a full house and should enjoy a good if short run at the Fringe.