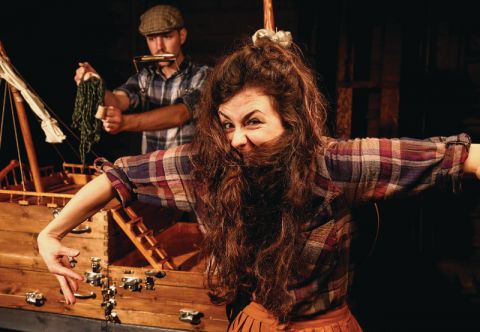 On a tiny boat in the middle of the Edinburgh Fringe Festival stands Half a String’s mesmerizing story A Heart at Sea. A live music and puppetry production, not only remarkable in its design and a breathtaking delight in its delivery, but a tale which looks grief in the face and turns it into an adventure!

When a boy loses his sister he decides to bottle up his heart and throw it into the sea. Out of an exquisitely crafted chest, worlds and underworlds unfold, carrying miniature puppets on an epic journey to recover a lost and, once broken, heart.

The beauty of this show is indescribable. Initially bringing overwhelming joy as the compartmented wooden chest is opened to reveal the sea on which a tiny wooden boat may float - childlike wonder and excitement floods the mind. Puppeteer and designer Peter Morton carries each character and audience member along with every single figurine, coaxing a jaw-dropping response as the locations transform.

Upon the waves of Morton’s sea, ride the captivating sounds of musician and writer Avi Simmons. From merry sea shanties regarding beards and boats, to harrowing floods of instrumental music, Simmons steals the hearts through the ears of anyone who is listening. Recording the audience in live looped sound effects adds to the experience, individualising each performance as a journey only for you.

With a swish, an oooh, a blow and an ahhhh, a sad and heartbroken man takes to the waves to help tell the eyes and ears of Edinburgh, whether big or small, of a tale with whales, tiny boats and beards.