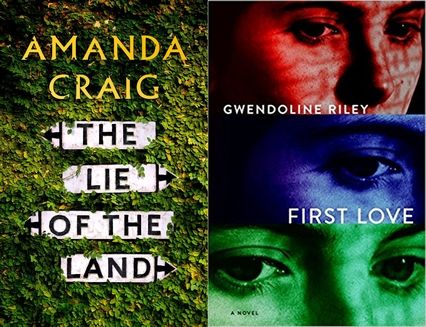 This joint 'meet the author' event paired two distinctive novelists, Amanda Craig and Gwendoline Riley, whose recent novels both astutely observe the often fractured, fragile flipside to the romantic image of relationships and marriage in contemporary society. Entitled “When Love is a Battlefield,” it was chaired with literary insight by Jackie McGlone to create a most enjoyable hour of conversation.

Amanda Craig is a British novelist, short-story writer and critic. Previously long-listed for the Bailey’s Prize for Women’s Fiction, her eighth novel, “Lie of the Land,” describes the emotional pain of divorce and disintegrating family life. Aged only 22, Gwendoline Riley wrote her first novel, “Cold Water” which won the Betty Trask award. Her new minimalist, 100 page novella, “First Love” is described by Jackie as “ sharp as a dagger” in its depiction of a toxic love affair.

The impetus for “The Lie of the Land” came from a governmental news report in which a minister claimed “There is no money” as a precursor to the financial crisis. Amanda wanted to write about how the recession has caused serious debt and damaged lives through the experience of different families in city and countryside. Having moved to Devon, she is well aware of rural unemployment, a county which is “poorer than Romania”

Her fiction has been compared to Dickens and Balzac as state of the nation novels, and from the first line, we are drawn into its personal and social drama:

“There is no money and the Bredins can’t afford a divorce .. the ruin of a marriage is a trivial thing to the persons not involved. There have been earthquakes, hurricanes, acts of terrorism and a worldwide economic crisis, yet as far as the Bredins are concerned, none of these matter.”

Gwendoline then introduces the first person narrator of “First Love” the 30 something Neve who appears to have an obsessive relationship with her older husband, Edwyn. She waits for him impatiently to come home, looking down from the window to the street; they share intimate cuddles, kisses and pet names - she is his “little cabbage.” But this warm loving portrait masks a cold undercurrent of displeasure with his sudden hurtful, hateful remarks as “Just so you know… I have no plans to spend my life with a shrew. Just so you know that. A fishwife shrew ..”

Both writers discuss their views on marriage today: “Love is a dance” says Amanda, “one goes forward, the other backwards, but you take turns to lead”. Riley refects on the comedy of marriage as seen in vintage Hollywood movies where affairs were not allowed to be portrayed. She is interested in the psychology, boundaries and commitment where a couple must value the consequences. They also describe how the presence of parents, especially bullying fathers, are featured in their novels, quoting Larkin’s belief that if you start to blame your parents, you never stop.

There are also amusing anecdotes and interesting questions from the audience about the changing status of marriage and their writing process. Amanda has favourite central characters, including Lottie and Quentin, who recur in different novels. A German PhD student is studying these links and wrote to ask her, “Vy ees your view of the verrld so gloomy?” which took her by surprise.!

It took seven years to write “The Lie of the Land,” due to its multi-layered, Victorian-styled plot, and her husband and friends read first drafts. In contrast, Gwendoline only writes first person novels, often with characters who are writers themselves. She is married to a poet, but does not seek or want an opinion – for her fiction is about imagination, returning to themes, writing and creating “the pattern of words.”

“The Lie of the Land”, by Amanda Craig is published by Little,Brown

“First Love” by Gwendoline Riley is published by Granta