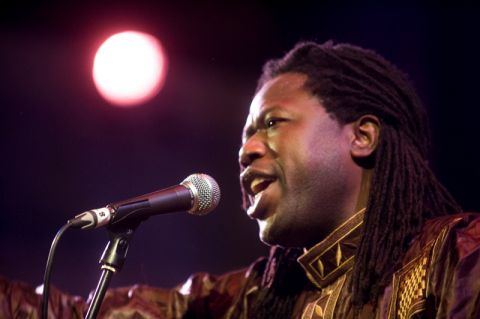 This round-up of some of the musical acts playing at the Fringe opened with an absolute bang courtesy of Simply Soweto Encha. An a capella group of five singers, they produce a rich, joyful sound with irresistible rhythm. The audience was suitably blown away, roaring their pleasure after each number. They played a small 15-minute sample of their longer show which can also be found at the Fringe.

The second act of the evening was a short sample with two songs from Apphia Campbell’s play inspired by Nina Simone, Black is the Color of my Voice. A powerful voice and dramatic intensity suggest the full show would be well worth watching.

Samba Sene & Diwan were the third and final act of the evening, and they thrilled the audience with their compelling vocals and the fantastic musicality of their full band: guitars, drums, sax, bass. This is live music at its best: each player worth listening to individually, producing great collaborative numbers.

My one qualm about the evening was the set-up of the room: rows of chairs with a tiny little strip of floor at the front for a bit of close-quarters dancing. It didn’t prove a hindrance to those of keen to dance, however, if only for a few songs.

Samba Sene’s amazing energy revved up the crowd for a satisfyingly kinetic end to the evening.