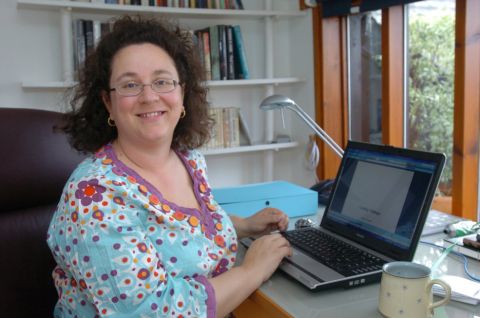 Anna Day, founder and director of the Dundee Literary Festival introduced this event entitled Killer Queen - Sophie Hannah is indeed the Queen of psychological crime fiction. Last year, "The Carrier" won the Crime Thriller of the Year at the Specsavers National Book Awards.

The ninth book in the Culver Valley series, “The Telling Error” features her detective double-act, Simon Waterhouse and his wife Charlie. Once again it features her trademark complex, intertwining plots. As Sophie Hannah explains:

A controversial, opinionated newspaper columnist Damon Blundy is found dead in bizarre circumstances - a knife has been taped over his mouth - and the police believe that a local mother of two children, Nicki Clements has something to hide. With a background of internet dating and masked identities it evolves into a complicated web of lies and secrecy.

Asked about the TV dramatisation of two Culver Valley books in the series Case Sensitive, Hannah admits she was concerned how “The Other Half Lives” was changed radically from the original narrative. “ At least I could watch it and not know who had done it!” she laughs.

The problem with the ITV 9pm slot, she says, is the editing process to adapt a complete novel into two hours when four episodes were required.

And then some very exciting news for Agatha Christie fans. You could hear the gasps of astonishment around the audience when Anna Day revealed a brand new Poirot novel would be published in September, written by Sophie Hannah.

First, Hannah had to meet the Agatha Christie family who controls the literary estate, to discuss the concept – a terrifying ordeal she said, like Dragons Den, presenting 100 pages of carefully constructed plot line. Beyond her wildest dreams, it was approved.

“And he should be brainy; he should have little grey cells of the mind." Agatha Christie, An Autobiography

“The Monogram Murders” is set in London in 1929; a young woman confides to Poirot that she thinks she is about to be murdered. Later that night, three guests at a fashionable London hotel have been found murdered with cufflinks placed at the scene of each crime. Could there be a connection with the frightened woman?

Since the publication of her first novel in 1920, more than two billion copies of Agatha Christie's novels have been sold around the world. A brand new Poirot story will certainly be a major, international literary event.

"The Telling Error" by Sophie Hannah is published by Hodder & Stoughton

"The Monogram Murders", a new Agatha Christie Poirot novel by Sophie Hannah will be published on 7 September by Harper Collins.