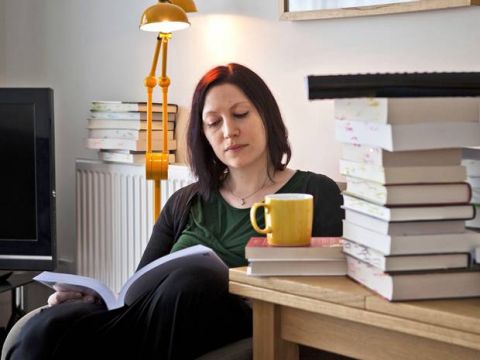 This event had the added enticement of free morning coffee (courtesy of Prestige Venues), which we could enjoy in comfort sitting at cabaret style tables in the Spiegeltent.

The presenter, Kate Mosse introduced the two British writers, explaining the discussion would be “like a private conversation in public”.

Natalie Haynes is a comedian, writer, broadcaster, literary critic and classicist. “The Amber Fury” is her first novel, included in the Book Festival’s First Book Award.

Helen Walsh has written four novels, most recently “The Lemon Grove” which has been critically well received. She quotes Woolf on her website, "To while away the time, I may as well scribble." It seems that her new “electrifyingly good” novel is more than scribbling.

After five sell out Edinburgh Fringe comedy shows over the years, Haynes has not lost her spontaneous humour as seen in her witty performance here. She admits that she now prefers tragedy to comedy, adding that she has a passion for TV detectives. "The Amber Fury" is described as a gripping, elegiac thriller.

In order to cope with the grief of losing her fiancé, Alex escapes from London to Edinburgh to work at a Pupil Referral Unit. Introducing the troubled teenagers to the Classics, they are inspired by the cruel, bloody revenge of the Greek Tragedies, which she realises may get out of hand.

“Think of Medea – and as I shall never have children, I can see she had a point!”

Mosse asks why she chose Edinburgh as the setting. Natalie relates a very personal anecdote, the fact that she heard the news of family bereavements, the death of her grandparents while at the Fringe. But her grief, the tears of a clown, was helped so much by friends and fellow performers here.

"The Lemon Grove" is about a dysfunctional family on holiday in Mallorca. Jenn and her husband Greg are joined by his daughter, 15 year old Emma and her boyfriend Nathan. He is an Adonis figure, seducing Jenn by his beautiful, boyish sexuality.

Walsh describes all the characters as being on the cusp of change. Emma, blossoming into womanhood, Jenn, 40-something, envious of her teenage stepdaughter, Greg going through a mid life crisis and Nathan, 17, a rebel without a cause, creating an emotional fracture in the family relationships.

Her previous novels are about urban social realism and this story too might have been set around Manchester. But she needed to take Jenn away, where the suspension of reality entices her to transgress her moral parental code of conduct.

Helen has been visiting Deia in Mallorca for over twelve years, “thanks to Easy Jet!”, and knows the lush island coastline very well, a hot, sultry setting for this dark tale of passion and revenge: Chick lit with true grit.

Natalie talked about how she plotted the narrative using “lots of index cards to follow three time lines with military precision.” She wrote the beginning, middle and end but then re-wrote the start. She believes Martin Amis does the same which made her feel better!.

The Amber Fury by Natalie Haynes is published by Corvus, an imprint of Atlantic books.

Voting for the First Book Award closes on 17 October. See details of all 46 titles at: www.edbookfest.com

The Lemon Grove by Helen Walsh is published by Tinder Press