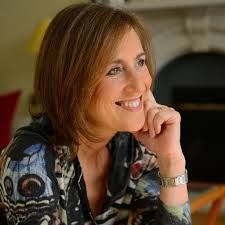 The first of many hearty laughs during this lively discussion was when Nick Barley (Director of the Book Festival) welcomed us to the Open University event. He expressed surprise at such a large audience turning up on a wet, stormy night to see a debut novelist whom no-one may have heard of!

The discussion began with a brief overview of Wark’s career as a news journalist, covering difficult interviews including with Margaret Thatcher in 1980. She recalled with a smile the fact that Mrs T kept saying passionately, “we in Scotland” despite the political differences across the UK.

So, the first question was why she decided to write the novel The Legacy of Elizabeth Pringle. Her children had left home and her mother had recently passed away, making her realise that stories, memories and experiences of older people are so important to share.

The plot in brief: born just before the First World War, Elizabeth is a strong, independent woman, a lifelong resident on the island of Arran, “an exceptional teacher” and passionate gardener.

When Elizabeth dies aged 90, she has left her home to a stranger, Anna, a young mother whom she had met more than thirty years before. Now Anna’s daughter Martha arrives on Arran to find out more about Elizabeth Pringle and why her mother would inherit the house.

Kirsty explained that Arran is very much part of her life, from childhood to present day. The island, “Scotland in miniature”, is a strong character in the novel. She’s also fascinated by families, the fact that she and her mother did not have an emotionally close relationship.

An amusing anecdote she told is that as her mother was a teacher, she would often ring her up after Newsnight to criticise her grammar - she had used a split infinitive - or to say that she did not like her hairstyle!

The structure through alternating chapters, past to present, creates a haunting story of the lives, secrets and dreams of Elizabeth and Martha across the generations.

As a journalist, Wark enthused about the research she carried out to ensure facts were accurate: finding information on WWII aircraft which crashed on Arran, and the prime era of shipbuilding in Glasgow, with the historic launch of Queen Mary down the Clyde.

From the questions from the audience, many had read the novel and were keen to ask more details. One reader was fascinated by the poetry quoted, to which Kirsty explained that this was her grandparents' literary passion, giving each other anthologies as gifts, as “poetry is part of your soul”.

We heard that she has signed a contract to continue as a Presenter on Newsnight and that she has a two-book publishing deal – so now is rather daunted at the challenge to start writing again. Next time at the Book Festival she will certainly not be introduced as a debut novelist.

“Wark depicts the weather, the landscape and the inhabitants of the island so vividly that all I wanted was a ferry ticket" (Woman and Home).

The Legacy of Elizabeth Pringle by Kirsty Wark is published by Two Roads Books.