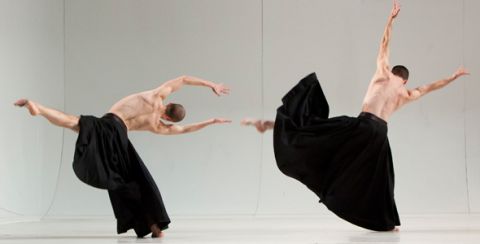 The Rite of Spring, when first performed in 1913, stirred emotions to such an extent that members of the audience attacked each other, and then the orchestra, hurling anything available in their direction. Whether they were shaken by the dissonance of Stravinsky’s music, or the ‘barbarity’ of Nijinsky’s choreography, is unclear, but a hundred years on, it is widely acknowledged that this event changed ballet forever.

Given that a century of dance evolution has taken shape since this catalytic moment, I did not expect to be shaken, but was hoping to be stirred. Tonight’s performance by Scottish Ballet was choreographed by Christopher Hampson in 2011, a year before he became their artistic director. Brought to the Edinburgh International Festival as part of the Dance Odysseys season, this marks the UK premiere of Hampson’s Rite of Spring.

This is a pared-down, stark interpretation that follows the two-part structure of the original. Using only three performers and a simple, bare set, the focus is all on the drama that is so powerfully presaged by Stravinsky’s music.

The setting for both parts does not change: against a black backcloth and floor, a high, white wall stands out dramatically, enclosing the dancers on three sides and sloping gently so that it is just discernibly higher by the time it reaches round to downstage left, all sides curving in to the space as it met the floor.

Part one opens with two male dancers: bare to the waist and wearing long, full, black skirts, attention is drawn to the strong, clearly-defined upper-body and arm movements, contrasting with the sweep and flow of the material below the waist. They are two brothers, the older initiating the younger into a set of rituals that are practised and repeated with increasing urgency. Their response to the appearance of a woman in white on top of the wall, who dances with them but remains somehow aloof and out of reach before disappearing again, delineates a subtle difference between the attitudes of the two brothers.

The younger brother is left alone in front of the curtain as it falls to end part one. As he sits, motionless for some minutes, staring towards the light, his knees hugged to his chest, attention is focused on the movement of the music. When the curtain rises again there is a perceptible shift in mood. The older brother is now wearing army boots and camouflage trousers and, as he drags the younger back into the space and strips him of his skirt, the white walls now appear to be his prison.

The younger tries to repeat the ritualistic movements of part one but his elder’s rituals have changed. The younger is treated increasingly brutally in an effort to get him to submit to the new regime. When the woman appears again, she is now dressed in black and the younger man’s need to reach her becomes more desperate as he seeks to escape from this new brutality. It ends unexpectedly and dramatically as she falls, effortlessly and deliberately, backwards from the top of the wall as he leaps for her.

The strength and power of this piece is grounded in its simplicity. The music and movement are allowed to speak for themselves, unencumbered by the usual distractions of fancy costumes and scenery, a plethora of dancers and a story to ram home. Instead we were presented with uncluttered and clearly defined moods, its meaning left open to interpretation, its lasting impression beautiful, deep and powerful.