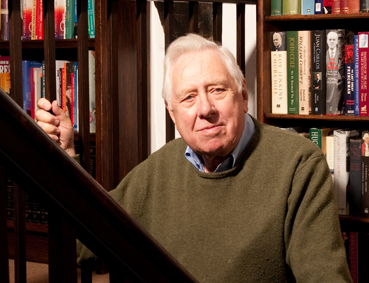 Roy Hattersley came to the first Edinburgh Book Festival in 1983 and has appeared in every year since then - now he is helping it celebrate its thirtieth year in his capacity as a founder member with a perfect attendance record!

This year his new book, on the "History of the Cavendish Family" appears to have been something of a return to his roots as he now lives and actually grew up close to Chatsworth House where he said he recalled having early picnics in the grounds in his youth. So it did not take much persuasion for him to ask his publisher if a history of the family could be his next book - of course this seemed so much more attractive when he was offered free access to all the papers and archive materiel owned by the family.

Hattersley described the Cavendish/Devonshires as rather like reading "an adventure story" as they have been such an important family in the history of Great Britain for over four hundred years. He described how the family set out to create a dynasty which would only be rivalled by the houses of Salisbury and Derby.

Originally their wealth came from allegedly unfairly taking advantage of the dissolution of the monasteries. Sir William Cavendish was the younger brother of George and both were great grandsons of the first Sir John Cavendish.

Sir William was in the Exchequer where he made a great deal of money and also followed the family tradition of marrying for money. He married, as his third wife, Bess of Hardwick by whom he had eight children so firmly establishing the family line.

Hattersley was very interested in the fifteen years of imprisonment of Mary Queen of Scots in the various castles of the north of England. He explained that Elizabeth was reluctant to have her put to death as killing a queen might cause unrest in the land. He told of her actual execution when two cuts were needed and when her head was held aloft by the executioner it was found that Mary had been wearing a wig.

We were treated to a remarkable resume of the whole Cavendish family from the moment they came into the limelight of power, right to the present day. It was truly a tour de force by Hattersley and showed the quite remarkable grasp he has of the detailed history of his subject.

As a parting shot he said that at least we had not been exposed to the tedium shown by an MP when in the middle of making his maiden speech in the House of Commons found himself yawning! There was no chance of this - Hattersley gave a most stimulating performance.