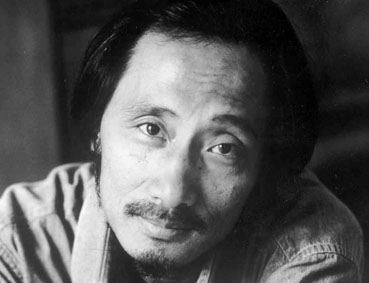 Chair Rosemary Burnett introduced Ma Jian's new book "The Dark Road" as being "an amazing read". It was another full house, which reflects the immense interest in China and its one child policy. It was explained that the title was, in Chinese, an allusion to a woman's birth canal and intended to highlight the need for women to be able to be in control of their own bodies.

Extracts from the book were read in Chinese by Ma Jian and then translated for the audience. It was clear that the text is wonderfully descriptive of life and the environment in China.

The story is generally about a young woman who is determined to take control of her destiny; she is representative of the new kind of Chinese women who has finding work as a key objective. She wants freedom and she wants happiness. This is in a society where the search for self-determination is viewed as a very 'revolutionary' act.

In the book the husband is portrayed as someone who represents the more 'parochial forces' in China. He is more formal and is a follower of Confucius.

Ma Jian talked about the belief in China that the spirit of an unborn child would stay with the woman until such time as it could be set free. In China this is seen as 'circular time' where things come back full circle. We were told that the book is written in the first person with a large part of the book in black script meaning that this is the view of another person looking on at the situation described.

There are clearly description of many tragic situations in the book where parents have to give up their child if they have more than one and face severe fines for having additional children. It appeared that in China the celebration of motherhood and of giving life has been sublimated and lost.

We were told of a professor in Beijing who was sacked and fined twenty years salary for insisting on keeping an extra child. Ma Jian said that some 200,000 children 'go missing' every year and that there were cases of children being used as a 'commodity' and instances where doctors have been bribed to keep quiet about births.

It was a stimulating hour and there were so many questions from an audience both riveted and horrified by the situation in China.

The book "The Dark Road" has been translated into English so will give people a clearer view of the current situation. With all his previous travel in the remote parts of China during 2008-9 this book will present a clear picture of the effects of China's one child policy.