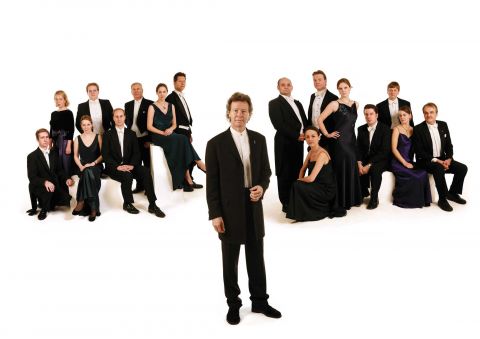 The Sixteen have gained a worldwide reputation since establishment by Harry Christophers in 1979. This Edinburgh Festival performance of a Purcell semi-opera by the choir and period instrument orchestra reinforces the enjoyment engendered by their participation in the three previous Festivals.

Purcell’s operas are precursors of what we know as opera today. Basically plays with music, they depend on stage machinery and the spoken word to portray various mystical and mythological plots written to please kings as much as public.

King Arthur is no exception. Designed to celebrate 25 years on the throne by Charles II, it was set aside because of his death and did not reach the stage until years later in 1791.

The words penned by the poet Dryden invoke magic, magicians, spells, enchanted and imaginary forests, and a King’s love. Despite the fantasy, they carry a political, almost nationalistic message: Britain’s King Arthur, aided by Merlin, defeats invading Saxons, wins his bride Emmeline – miraculously rescued from blindness – and is generous in triumph. Despite the merit of Dryden’s verse, it is Purcell’s music that survives and still has resonance to modern ears.

It would be invidious to single out individual performers for praise or blame. This was a coherent collective performance of music by arguably Britain’s most eminent composer.