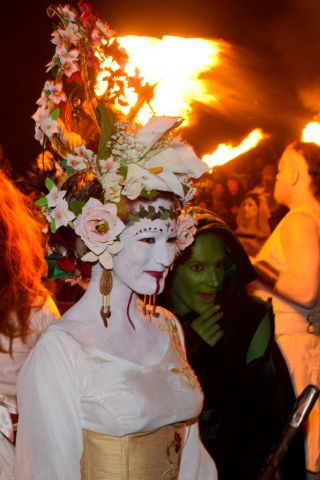 ‘Sacrifice the virgins!’ screamed a young lady standing next to me in the tightly packed throng, all craning for a better glimpse of what’s happening up ahead. Normally in a crowded public place, this type of loudly expressed sentiment would get you arrested, or at the very least cause a ripple of raised eyebrows.

I glance at the lady in question and in her inebriated state she fumbles to light a cigarette and looks back at me offering a guilty giggle as if to say ‘tee hee hee’. I feel relaxed about it all for I’m in the only place I know where ‘sacrifice the virgins’ is a perfectly acceptable thing to cry out. It’s met with laughter rather than horror.

She and I are just two of thousands (around 6,500 this year and up to 12,000 in previous years) surrounding a group of semi nude ‘red devils’ gyrating and prowling menacingly. They wield flaming torches and bang drums loudly. They become more agitated, hissing and threatening as the garlanded and regally costumed May Queen leads a procession of women clad in white through the crowd towards them.

I’m witnessing the symbolic battle for winter to yield to summer and its nearing its final stages at this year’s Beltane Fire Festival, this year marking its 25th anniversary amidst the iconic landmark structures atop Calton Hill. The weather has held despite the forecast and the rolling mist in the distance only adds to the spectacle.

The view of Edinburgh in every direction reminds me of Hollywood films that deify the luminous sprawl of Los Angles at night with endless rows of lights poking through the gloom. And just to add more ambience, there’s an unusually bright and ethereal glow in the sky to the southwest.

I wasn’t the only punter to notice how unusually light it seemed for the time of night. Perhaps the low-lying mist reflected the city streetlights more effectively, but the glow was aided and abetted by a number of safety lights erected throughout the performance site.

This combination of natural and artificial luminosity is just one of the many changes to take place over Beltane’s history. Including a now ticketed entrance fee there is a larger police presence including mobile CCTV vans, more safety stewards, portaloos and food stalls. I was disappointed to see this personally but perhaps it’s necessary for its survival.

All things evolve from organic and humble origins and it’s remarkable that despite the visible changes from year to year, this unique event has retained its historical and pagan roots and that the sense of scale and performance spectacle is still provided by enthusiastic and brave volunteers.

I say brave for performing semi nude through arches of fire and keeping the heightened frenzy of mock battle, drumming and dancing going for hours, sometimes in bitter cold and rain is testament to the event's cultural significance and popularity. Weather aside it’s always fun to either witness or take part in. It also helps if you’re performing to have the ability to be a carefree exhibitionist.

This year’s event was enhanced by some magnificent giant articulated puppets in the form of a dragonfly, a white fox, a red dragon bird and a jellyfish, all lit from within. In one memorable moment for many minutes the crowd fell eerily silent. The cheering, jostling and braying stopped as the puppets came to a standstill and the May Queen and company took the stage behind them.

I know each section of the event has its own significance and meaning (see explanation of Beltane ceremony) in the unfolding story of the seasons fighting for supremacy (Beltane has a sister event ‘Sammhuin’ on Halloween in which the process is reversed) but one doesn’t need know all the details, merely absorb the scale, the setting, the spectacle and sincerity of the performers.

To be honest, I’ve seen it frequently and become a little jaded, partly from multiple viewings and partly from its ever increasing commercialisation, but this year's affair was one of the best since its inception.

Perhaps it was partly because it was a Monday and not a weekend night that the smaller than usual crowd allowed better views and freedom of movement. It was also clear that half of the folk attending were visiting tourists witnessing it for the first time and it was through their fresh eyes and excitement I was able to enjoy it in a more reinvigorated fashion. Long may it last.