The Bible in Voice and Verse Review 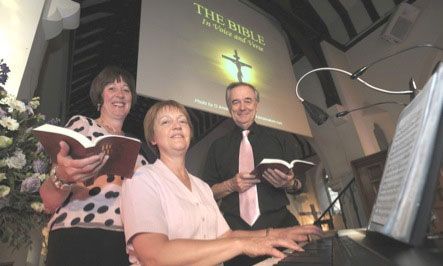 The King James translation of the Bible is 400 years old and in the course of an hour the very eloquent actor Lance Pierson, sadly albeit with a bad back, quoted short, poignant and significant passages from it.

He started with The Creation from the first chapter of Genesis, and worked his way through The Fall and The Flood and on to Moses and Joshua. Then there was the first book of Samuel, two well known Psalms and Isaiah. In half an hour we were refreshed in the Old Testament.

The New Testament passages came from each of the Gospels - Matthew, Mark, Luke, and John -  covering The Nativity, Jesus’s Ministry, The Passion and Resurrection, Pentecost and from the first Epistle of Paul to the Corinthians.

The chapter and verse of each passage was clearly shown on the large screen, with further brief information and some illustrations too.

But all this would have been a bit dry had it not been for the lovely soprano voice of Belinda Yates accompanied on an electric keyboard by Heather Chamberlain. In between the readings we heard appropriate and relevant songs from Haydn, Gwyn Arch, a traditional spiritual, Mendelssohn for the Old Testament.

For the New Testament music from Andrew Carter, Taizé, Stainer and Handel. A final epilogue was Rutter’s The Lord Bless You and Keep You. Whilst she was singing, Belinda Yates’ words were up on the screen.

It was all extraordinarily well produced. As a seasoned Christian - a former member of General Synod of the Church of England - I was ready to squirm at anything that approached raw evangelical zeal. There was none - simply a celebration of all that is so important in a translation of The Bible that has meant so much to the English language over four centuries.