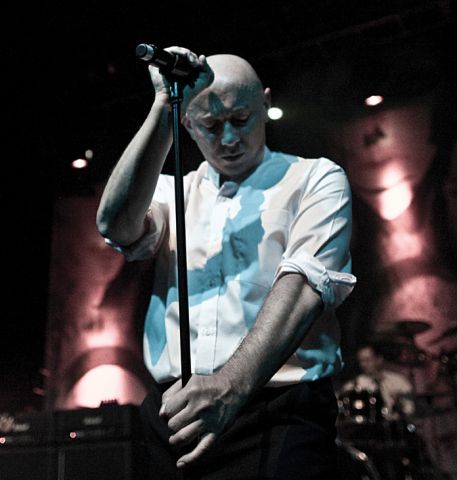 Rating (out of 5)
4
Show info
Venue
The Picture House

They don't do "Shot By Both Sides". There are looks of dismay on certain audience members faces as the lights go up at the end of Magazine's first Edinburgh show in almost thirty years and they haven't played their debut single and most famous song. Clearly, there is no room for nostalgic, ageing punks tonight.

Rightly so. It seemed perplexing when Magazine announced their reunion tour earlier this year and went out on the road playing all the old songs everyone wanted to hear. Dominated by the inscrutable presence of singer Howard Devoto, Magazine were always one of the most perfect examples of post-punk, the more forward looking and artistic movement which followed the first wave of gobby, sweary young folk with loud guitars. Magazine made a set of amazing records, sounding almost like a punk Roxy Music, full of Devoto's chilly yet wryly humorous songs of alienation and unrequited everything.

They split in the early eighties and Devoto spent much of the past twenty years in total retirement from the music business. Now they are back and it's business as unusual. Magazine shows earlier in the year were very much crowd-pleasing "Greatest Hits" sets. On reaching Edinburgh, however, things have changed and much of the set consists of lesser known and even semi-obscure songs, as well as a bizarre interval.

Devoto appears dapperly attired in black suit and bright red shirt, looking almost like a party-going Bond villain. Barry Adamson exudes coolness with a very large bass guitar and Dave Formula huddles at the back surrounded by banks of keyboards. To begin with, Devoto introduces every song by holding up a 12-inch record and announcing random directions on how to get the optimum sound capability from one's music collection. This artifice feels somewhat half-formed and disappears after a few songs.

The interval concept is also somewhat strange and ill-judged. For all their relationship with modernist art and cinema, which Devoto illustrates with between-song declamations on Erik Satie and Peter Bogdanovich, Magazine are still a very loud rock band. As such, they build momentum as the gig goes on and to suddenly stop for a twenty minute intermission seems teasingly weird. Is Barry's hip playing up or is Howard getting tired of it all again and feels the need to frustrate and perplex the audience?

Whatever it is, the momentum is never quite regained in the brief second set. But for all these odd flaws, Magazine sound utterly fantastic tonight, ferocious even. Highlights include the cold, white funk of their take on Sly Stone's "Thank You (Falletinme Be Mice Elf Again)", the messianic fervour of "The Light Pours Out Of Me" and the gloriously icy wastes of "Permafrost". Devoto pirouettes and rages around the stage, looking completely at home despite his absence for so long.

Whether this reunion will last any longer looks debatable. There certainly seems to be no sign of any new material, a bugbear which weighs down many reformed bands. But Magazine have proven their influence and the sheer strength of their material, despite not playing some of their best-known numbers. And it is always good to see a crowd gleefully sing along, "I will drug you and fuck you on the permafrost".