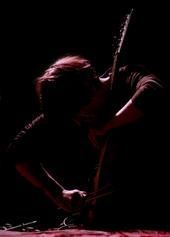 The Telescopes in 2009 seem like a band out of time. Formed in the late 1980's, they were part of the same musical axis which comprised My Bloody Valentine, Loop and Spacemen 3, all of them offering a quintessentially English take on pulverising psychedelic dreamrock with a side order of dubious medicines. The Telescopes were Peel favourites, signed to Creation Records, but, unlike their peers, they have been forgotten, overlooked as they fell through the cracks.

Now comprising founder member and vocalist Stephen Lawrie with an accompanying set of hired hands, it's hard not to feel an air of nostalgia for 1989 within the sparse but welcoming Sneaky Pete's audience. Coloured orb lights flash around the stage area while white denim jackets and Dr Marten boots are conspicuously on show.

When a somewhat numb looking Lawrie and cohorts begin proceedings, however, they blow the concept of nostalgia, and indeed pretty much everything else, out of the roof.

It is like standing directly in front of a roaring jet engine. A twin guitar battery mixed with electronics, the sound is dense, murky and mind-bogglingly loud. It's like being crushed by an almost physical audio wave. Not for the first time, your correspondent begins to consider the merits of ear plugs.

Lawrie spends most time hanging off his mike stand, sometimes curled up on the floor, his vocals completely obscured beneath the barrage. As one number crashes to a halt, the next one immediately begins to grind up.

Lawrie appears completely oblivious to the audience, despite the warm reception. Finally, after a mere 40 minutes, he suddenly breaks from the stage and, grabbing his coat, walks through the audience towards the exit.

The band continues to blast away for a few minutes longer before breaking down into jagged splinters of disintegrating noise. It's been a brief, sometimes uncomfortable but more often blissfully euphoric, experience. One only has to surrender to the sound.