I Went to the House but Did Not Enter 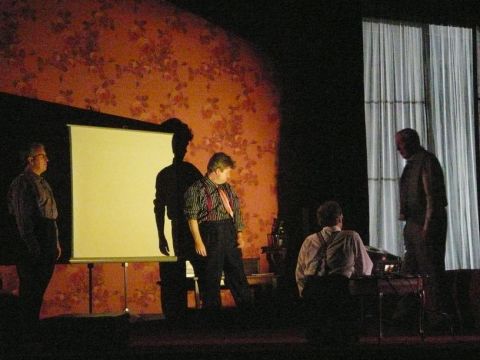 Heiner Goebbels, the German avant-garde composer, has transposed texts from four of the most influential writers of the 20th century - T S Eliot, Maurice Blanchlot, Franz Kafka, and Samuel Beckett - and created three tableaux pieces sung by the all-male Hilliard Ensemble. The unifying theme of this "staged concert," receiving its debut at the Edinburgh International Festival, is the ineptitude of a "pack of [middle-aged] nobodies" to take decisive action in their lives. Using the "stream of consciousness" literary technique, these interior monologues comprise the fragmented internal musings of ordinary, urbane men.

The performance of the first tableaux, set in an elegant European drawing room, begins in silence, punctuated only by the individual actions of the four droll characters methodically wrapping up white china set on the dining table and placing it in a box. Eventually the singers break into harmony and we hear the text. Then slowly, the action is repeated in reverse, but this time the china is black - as if to emphasise the mundanity of the characters. The other tableaux, set in a house, a road and a hotel, all emphasise the isolation felt by the characters as they progress, or not, in their daily lives.

The Ensemble are professional singers, not actors. The singing was marvellous. All four men - David James, countertenor; Rogers Covey-Crump, tenor; Steven Harrold, tenor and Gordon Jones, baritone - effortlessly coped with Goebbels' complex chord structures. But at the end of the day, it is difficult to transpose philosophical musings into a theatrical event - one needs time to read the text and meditate on its ramifications - and although much time was devoted to contemplative silence in the production it ultimately lacked drama, an essential ingredient in any staged event.