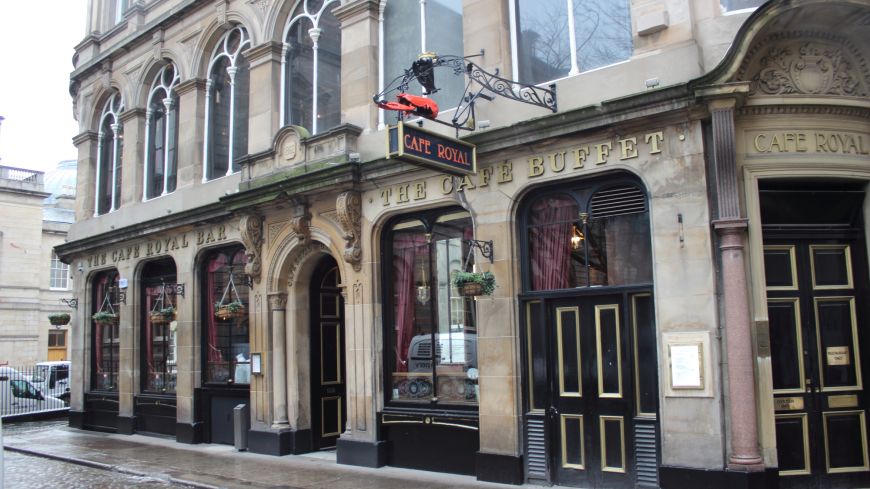 In spite of its proximity to Princes Street and Waverley Station, Cafe Royal is not a pub you stumble upon easily. That's both a pity, but it's also part of the appeal.

Cafe Royal is a good-looking, Victorian "palace pub," an upmarket, Parisian-styled bar and restaurant that has managed to maintain much of its unique period character and yet remained refreshingly low-key at the same time.

You get to the pub from Princes Street via the alleyway or narrow, crooked path, or take the cobbled lane from St. Andrew Square. The building and entrance is on the street corner, at the alleyway's end.

Inside is an airy and warmly lit room with a circular, island bar at its centre, and booths with comfortable leather seating under the tall windowed sides. Tiled floor, a large Victorian wooden fireplace, gleaming brasswork, ornate mirror, and gas-lamp style lights of an earlier era, help conjure up a sense of stepping back in time.

Also, on the far wall are the Doulton murals - John Ayre's workmanlike tile portraits of six famous historical figures - which date back to late nineteenth century.

The building, designed by architect Robert Paterson, was originally built to be a showroom for the latest in gas and sanitary fitting, but it's unlikely it was ever used for that purpose as the Cafe Royal opened up in 1863 the year after the building's completion.

Cafe Royal was earmarked for demolition under a plan in 1969 to extend the Woolworths store on Princes street. The city's planning officer, backed by 8,700 signatures, denied planning permission for the scheme and this Victorian gem of a pub was saved. The whole building and its interior was listed on 27 February 1970.

With the absence of background music and television noise, it makes a great place for a quiet afternoon pint and a read of the newspaper, or get-together over wine and oysters with friends. Its central location does mean that it can get busier as the offices turn out at the end of the work day.

The Cafe Royal restaurant has a good selection of fish courses and traditional Scottish food.

Upstairs at the Voodoo Rooms (the former Cafe Royal Bistro), you can find a good selection of food from brunch to supper.