Film of the Week: Rise of the Planet of the Apes 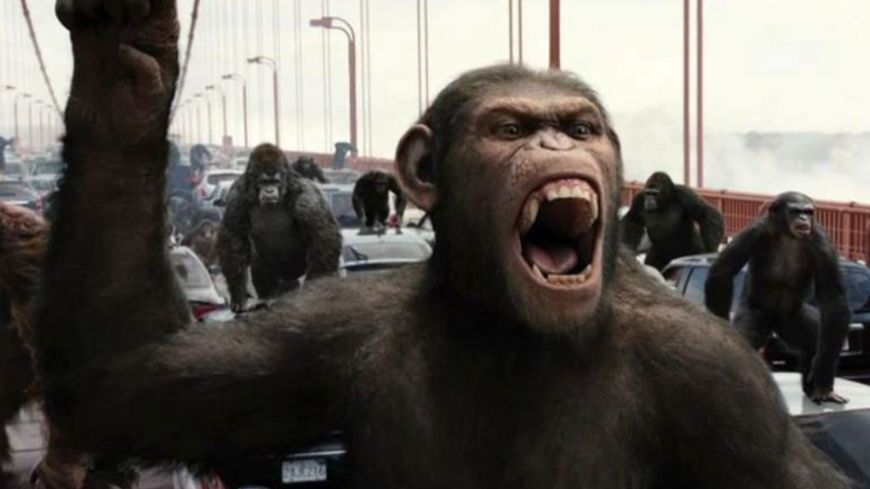 ‘Four stars?!’ I hear you cry? I nearly gave it five. Had some of the lame dialogue been trimmed and had the mostly excellent CGI apes not acted the pants off the human cast I might well have bumped it up a notch.

Not since The Bourne Supremacy have I had my expectations for dumb Hollywood fare so wildly exceeded. Like its subject-matter the story begins slowly but evolves as rapidly as the engineered intelligence in its lab rat subjects.

I admit I’m not overly familiar with the originals. I’ve seen Planet of the Apes and Charlton Heston’s infamous cry of horror as he realises the truth of his predicament upon spotting the Statue of Liberty. And there’s a blink and you miss it reference to that here, perhaps hinting at a future film. I’d also seen Tim Burton’s disappointing reboot, so I didn’t have high hopes for this.

So here’s reboot number two, and this time they get it right.

CGI’s come a long way and although Burton’s use of costumed actors did the job well, this is a leap forward. Having said that, one is constantly aware we’re watching animated effects rather than real animals. It’s possible real apes were used in the mix here, but the fact that I’m not sure if and where says a lot about how well it's done.

James Franco plays Will Rodman, a biologist developing a serum that might cure Alzheimers. He’s very motivated because his ailing father (John Lithgow) has the disease. One of the noted side-effects of trials on chimps is vastly increased intelligence and naturally the corporate sponsors are interested in the financial possibilities.

But just as things look bright for everyone’s future, the misinterpreted actions of an aggressive trial subject shatters the dream. Rodman continues his work from home alongside the only remaining survivor of the experiments, a baby chimp named Caesar. As he cares for both father and chimp, he realises Caesar’s rapidly developing intelligence and human qualities are the result of his serum, genetically passed from mother to son.

Years pass and Caesar reaches maturity. Its beginning to look like Rodman’s observations and experiments are finally about to pay off. But the bad luck lightning strikes twice and Caesar is carted off to an animal sanctuary where he and other apes endure prison like conditions and cruel handlers.

I don’t want to give too much away so I’ll just add that Caesar plots his escape and eventually all hell breaks loose.

It all works because right from the start we sympathise with the apes. Caesar is in one sense Rodman’s child and we watch him grow and develop in such a way that we care for him as if he is simply a real child.

It’s remarkable that the effects team and the motion capture performance of rent-a-monster-man Andy Serkis (formerly Gollum and King Kong) is so emotionally expressive. I felt the occasional shiver and misty-eyed moment of empathy for Caesar and for the trials and tribulations he faces in his quest for emancipation. It’s a story in which although many of the humans are decent, we root more for these digital incarnations, willing them on and cheer if a human character gets a deserved comeuppance.

There’s a couple of remarkable scenes and some terrific shots, one of thousands of leaves falling onto a road and later a scene of police on horseback shrouded in mist charging into the apes is quite something. There’s also a terrific sense of movement from the camera capturing the apes swinging about. I even detected an echo of the Dawn of Man sequence from 2001: A Space Odyssey, not a bad film to pay homage to.

Despite the odd duff FX shot and some unnecessary exposition and subtitles, it’s suspenseful and gripping throughout, continually picking up speed to reach a thrilling climax that left me wanting more. No doubt a slew of sub-standard sequels will follow.