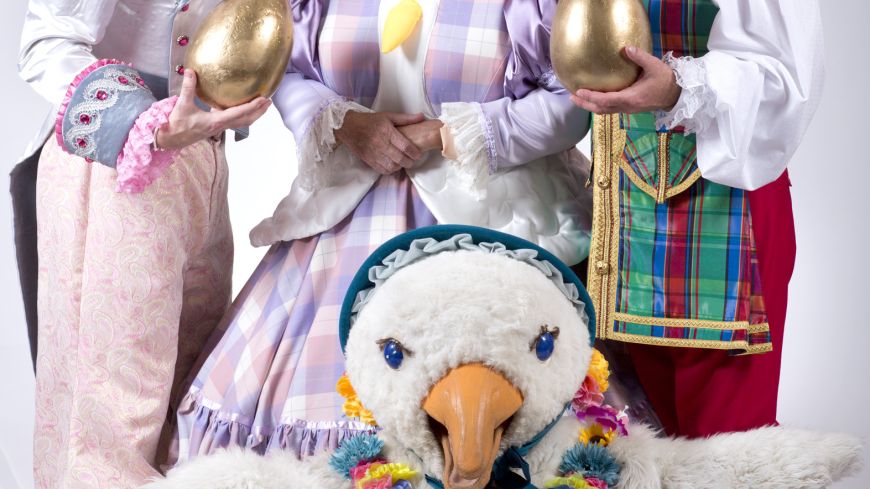 Talk about Priscilla, Queen of the Panto! Priscilla is the cute bird owned by the eponymous Mother Goose (Allan Stewart) that happens to lay golden eggs. The said owner, having gone to fat and lost her looks, enters a Faustian pact with the evil Demon Vanity (Grant Stott) to regain her beauty, with poor Priscilla as the price.

Naturally, in Pantoland, she takes a tumble to herself and mends her foolish ways at the end with marriage proposals flying around the stage in as much profusion as the streamers that fall from the colossally high ceiling in the King’s theatre.

With the backdrop of a giant Victorian Valentine on the curtain that screens the stage before the action starts, the big noisy family audience is treated to schmaltzy Christmas music as a big build- up to the main event.

It could be argued that when you’ve seen one King’s panto, you’ve seen them all. There is Allan Stewart’s utterly unfeminine dame with more costume changes than Edinburgh’s road diversions, Andy Gray’s daft fall guy, in this case Elvis McSporran doing a mean version of the King, and Grant Stott’s outrageously evil and masculinely camp villain.

There are pop songs, local jokes and dance routines from an adult professional ensemble with a platform given to young talent from Edinburgh Dance Academy.

The time honoured format is imposed on a different children’s tale each year. (They are even posing in next year’s Peter Pan costumes at the back of this year’s programme.) However! The trio of Stewart, Gray and Stott, whose weel kent coupons appear on the sides of Lothian buses in anticipation of the panto every year, are masters of the genre.

Aided by the cheeky texting Fairy McSquirrel-Smythe (Katy Heavens) they produce a corny but rather wonderful panto experience. There may be no real surprises but its unpretentious and thoroughly inclusive style, complete with slightly wobbly scenery and old fashioned time honoured format with tongue twisters, malapropisms, sparks and disco lights, is a winner every time.

The roles of Jill and Torben (Hannah Robertson and James Hume) provide the pretty girl and handsome chap roles but seemed a weak distraction to the exaggerated action going on around.

There is a scene in the ballroom when the dancers perform a token Cancan when everyone else dressed for Scottish country dancing yet this is a show where Scots is spoken unashamedly and local jokes about Hibs and Hearts and, of course, the Edinburgh trams are widely appreciated, it seemed a missed ‘opporchancity’ to perform some actual Scottish country dancing.

Within the dancing ensemble, Katrina Rankin is outstanding as she goes beyond just dancing well and looks truly in each part she plays, engaging in each scene with the action around her.

This annual night of fun that is all topical trams and twitter, fireworks and flying, rhyming and rocking, Cancan and corpsing, provides the perfect Xmas party for all ages as the evening is ended with everyone ‘Rockin all over the world’.

P is for Panto: A round-up of Edinburgh Christmas Shows 2012