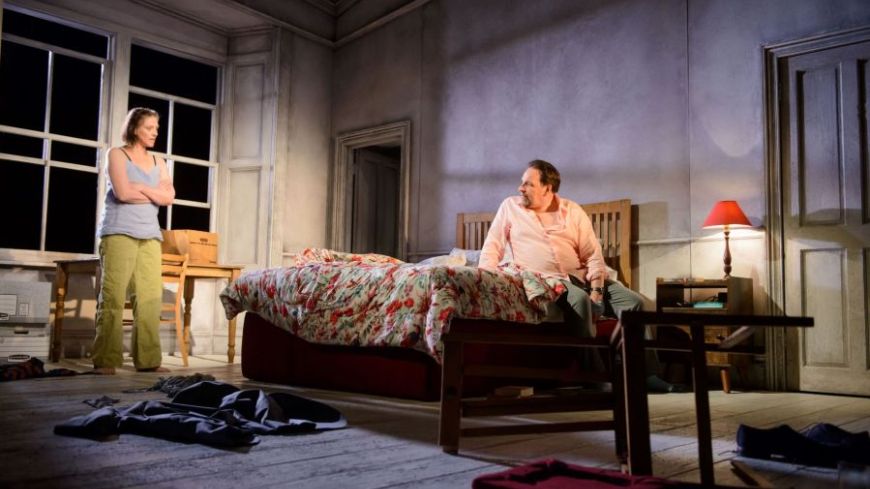 Roses are the queen of flowers, symbolising femininity, love and, spiritually, the sweet scent evokes the presence of angels.

At its dramatic heart, this is a portrait of womanhood - as wife, mother, daughter, lover - through an entangled web of relationships. Twelve interlinked scenes focus on a series of intimate tête-à-tête conversations, revolving around themes of secrets and lies, truth and trust.

The narrative begins in Luci and Christopher’s bedroom with its shabby grey peeling wall paint but brightened up by a pretty floral duvet. It’s early evening and after light-hearted chit chat about their day at work, a kiss and cuddle, Christopher is desperate for gin and steak. But Luci has other ideas. She explains that she has locked the door in order to have a serious talk, and when he realises that this is not some silly prank but imprisonment, he begins to panic.

A bedroom farce ensues as he attacks the door with a chair, shower head and toilet seat becoming more and more irate. And hungry: “Could you not have waited until after dinner to pull this little stunt?”  Although a physical bear of a man, Peter Forbes now appears weak and humiliated by his wife’s control over his freedom.  What has he done – forgotten an anniversary, a birthday?  Neve McIntosh maintains a cool, calm demeanour as she baits her husband with a volley of brusque, satirical remarks.

As night falls, he pleads with Luci to open the door as he wants to watch the men’s final of the US Open on TV, “But you don’t even like tennis!”  - “Am I not allowed to change?”  She pops open a bottle of champagne with a fizzing splash, pours herself a large glass before launching her verbal attack, an accusation of infidelity.

The façade of their happy, amorous marriage as first witnessed, has now cracked and crumbled, with distinct echoes of Albee’s Who’s Afraid of Virginia Woolf? which can be summed up by the line, “Truth and illusion, George; you don’t know the difference.”

With a slick scene change, the action moves to another home and a confrontation between their 19 year old daughter, Caitlin and her former school teacher, Sally. With green streaks in her hair and in a red lace cocktail dress, Caitlin is covered in blood, conjuring up images of the glamorous assassin Villanelle. Dead birds and murder is the topic of their bizarre drink-fuelled chat as the teenager wants to settle some old scores – ‘you won’t tell me the truth, that you love me ..loved me then,’ becoming more hysterical, dismissing everything in life as fake, false, fantasy.

If Luci describes Caitlin as 'a fxxxed up kid', then Helen, a successful academic, has lost all patience with her similarly messed up daughter, Sally, who still demands unconditional motherly love. As they engage in a mutual blame game, Maureen Beattie portrays Helen with quietly composed intelligence, insight and gentility, in a most potent, poignant scene. Later, her brief encounter with Christopher in a tranquil woodland, the language is delicately laced with sexual tension and poetic lyricism - the opportunity to share their feelings, but is she being honest with her reserved, romantic soul?

All these characters appear out of harmony as communication breaks down through hidden secrets and distrust. The rhetoric of the dialogue – short staccato comments, questions left unanswered – is purposely elliptical. Alternatively, perhaps could be viewed as convoluted and confusing depending on how you embrace this surreal, absurdist drama.

The neat dramatic structure finally spins around full circle like a dance of waltzing couples, as we return to see Luci and Christopher picking up on their previous, lock-in conversation in sombre, languid mood. Their marital bed now sits on an empty stage, the walls and windows of their home vanished to reflect their strained, damaged relationship.

The set design is brilliantly imaginative with magical scene changes and subtle lighting to denote the passing of time from sunrise to sunset.  Written and directed with filmic style and painterly vision by Zinnie Harris, the characterisation is sharply observed akin to a Chekhovian tragi-comedy blending hilarious antics, heartfelt loss and emotional despair.

The scent of dried up, dead roses in the garden does not smell so sweet.