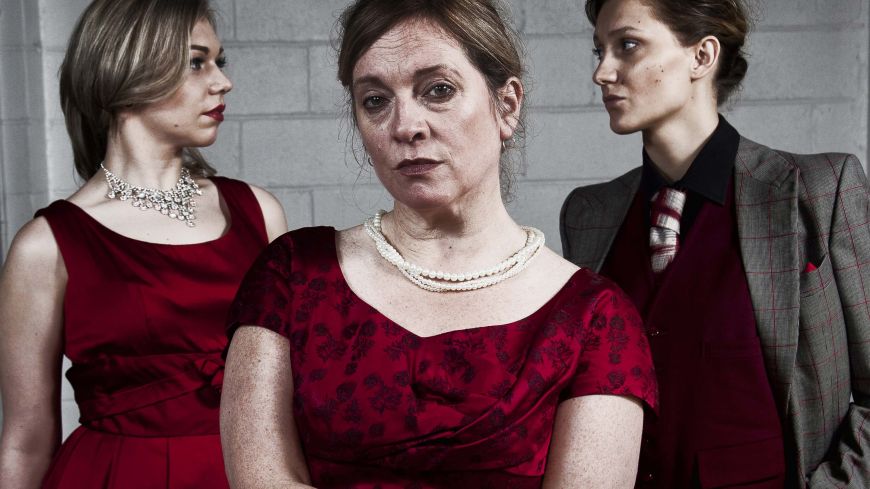 A sartorially splendid spectrum of sexuality greets as The Gates is entered. There is a real sense of being part of a 20th century version of the Bar at the Folies Bergères. Music from ‘50s singers like Johnny Ray and Tex Ritter swims in the background as a wristband for a ticket is issued by the glamorous check-in lady. Sign the entry book, have the odd bit of polite frisking and you’re in!

With immaculate attention to detail, glamorous shades of rouge et noir and pinstripes are everywhere. Top marks to Jessica Brettle for the devastatingly fabulous costumes and to Battlefield Barbers for the coiffures!

This production is an imagining of a slice of life in the small Bohemian private members’ club called The Gateways that operated in Chelsea from 1945 to 1985. It was a safe haven for folk living on the edge of society where they could ‘mind their own on a Sunday night’. The programme blurb makes the ambitious claim that the show is ‘West Side Story meets Cabaret meets Chicago’ and it turns out that is pretty much what it is.

Local gangster Chelsea Charlie, brilliantly portrayed by Bobby Weston, enters the club with his entourage of molls and mobsters like a bunch of clumsy tourists to offer protection. Their total opposition is shown in the song "They’re Not Like Us" that is volleyed back and forth between the two tribes.

The challenge in the song "You’ve Got to Win Her" thrown out among the butch lesbians to attract Charlie’s woman Judy, terrifically performed by Jennifer Dempster, is the catalyst to tragedy.

While the first half is mainly ensemble pieces there are some fine solos from Ted, the club’s owner, (Stewart Ennis) who croons the mic and Smithy the bartender (Patricia Mullin) with her song about her sad acceptance of the eternal triangle, "Three Halves Don’t Make A Whole". But it is the two, sung with deep feeling in red suited perfection, by Jennifer Dempster, "In A club In Chelsea" and "Falling, But Feeling High" that really do the business.

The second half is more sombre taking the form of a series of solos including a magnificent Cleo Laine style "This Is My Backyard" from a red satin suited Lorna Brooks as Gina. The ensemble only appears towards the end at the showdown in solid defiance with "Mindin' Our Own On A Quiet Sunday Night" before a filmic fight is performed to strobe lights in slow motion with noticeably phallic weapons.

But before that, a gangster chorus, with hints of Gilbert and Sullivan in the waltz tune, where they claim that woman needs a man, got boos from a certain section of the audience. Their final chorus of sorrow after the stabbing of Jo is in the song with the very human cry, "More Than This".

There is a strong feeling that this company has embodied the ethos behind The Gateway as they worked so well together with all remaining in character throughout. Inspired by a variety of music from the 1950s, this beautiful burlesque hymn to love, liberation and respect is one well worth hearing.