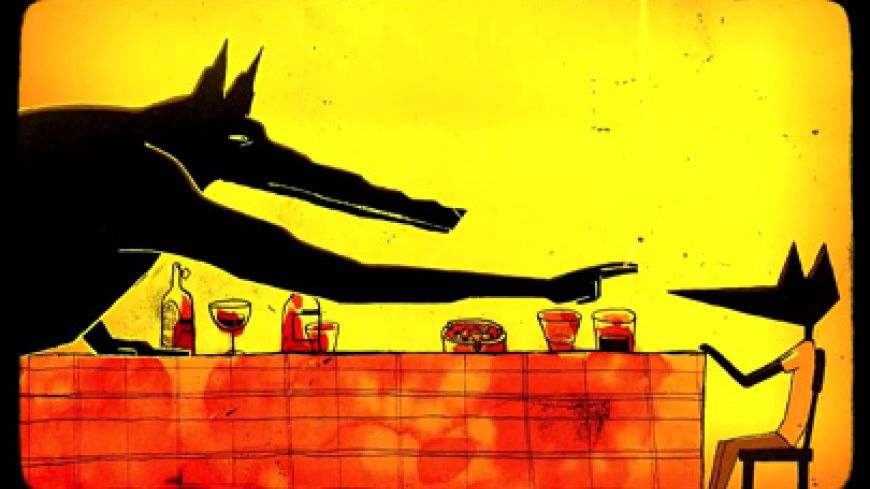 The Silence Beneath The Bark: Joanna Lurie (Director).

A night of magic and fantasy at The Manipulate festival integrating film, animation, puppetry, and theatre.

The Visual Theatre Festival, Manipulate, has been running since Monday 31st January and if tonight was anything to go by, what a week it must have been! Friday night’s entertainment, Snapshots: Creation and Play, was made up of six different performance pieces that combined puppetry, animation and live music in a spectacular, fantastical and unique way.

On entering the theatre space we were first presented with bright goody bags containing a drink and a snack, and then a programme with little bits of folded paper wrapped up inside – there was much child-like intrigue, giggling and excitement among the adult audience as the bags were opened and paper unwrapped.

The programme for one of the pieces explained how recent productions had encouraged, ‘a diversity of audiences to an art form often seen as purely for children.’ From first entering the foyer until the final note of the final piece one felt like a child in an adult’s bizarre world, or like an adult allowed into the surreal imagination of a child – either way, the evening was utterly magical and so much fun.

The first half, entitled Creative Opportunities, consisted of three pieces by different Scottish artists who had ‘each been given an award by Puppet Animation Scotland (PAS) to create a piece of visual theatre’ and two short animation films that had also been shown the previous evening.

The first performance, Edward’s House of String told, using a combination of puppetry and stop motion animation, ‘a twisted tale about a lonely man Edward and a mysterious string that helps him thread together memories of his past’. With a tree-like sculpture made with balls of wool and reels of cotton in muted colours and a ‘screen’ for the stop motion animation woven out of the yarn, Cindy Derby gave a skilful performance, transforming her hands into birds and somehow managing to invest them with real emotional content.

Next came the first of the animation films that explored the nature of relationships, both the positive and the more sinister, damaging aspects of interaction. In the first, Old Fangs, ‘a young wolf confronts his strong father with trepidation’. This was light, bleak and moving all at the same time and contrasted beautifully the magic of childhood memories and the danger of returning to their source.

The second piece funded by PAS, Spoonfed, was ‘a commentary on authority, peer pressure and the media… a journey through the dark adventure of finding one’s true self’. Using puppetry and animation, as well as an enormous robot representing The Law, this explored taken-for-granted ‘knowledge’ and how all ‘our thoughts are made up of other people’s opinions’. This was an in-your-face, fast, furious, fun and funny thought-provoking monster!

The Silence Beneath the Bark, the second animation piece showed, ‘the beauty of snow falling on a giant magical forest’. Two orangey-coloured, ghost-like creatures play in the snow, swallowing mouthfuls while watching in wonder how this changes the colour of the other, giggling and marvelling at this strange new world they discover together.

The final PAS-funded performance of the evening, Hans and Frieda/ Freaks, was inspired by the 1932 cult film Freaks, in which ‘the marriage of a beautiful trapeze artist and a midget from the sideshows ends up revealing the power of a maligned authority when it unites’. This was an extraordinary piece that successfully matched two puppets, Hans and Frieda, with two actors to create a believable, darkly absorbing piece of theatre.

The second half – ‘Matthew Robbins Sings the Death of Flyboy, Sad Lucy and Other Stories’ – was a light-hearted, quirky and humorous take on the ordinary and everyday. Matthew Robbins is an artist and musician, who could probably also make it as a stand-up comedian. He told the most surreal stories through song, accompanied by his band and live, hand-cut animation.

The evening ended with the audience-congregation up on their feet to sing ‘God blessed the sheep’ to the tune of ‘Jerusalem’. This was a bizarrely fitting end to what turned out to be more than 3 hours of surprises and delights. This was one magical gem after another – cannot recommend such an evening highly enough!