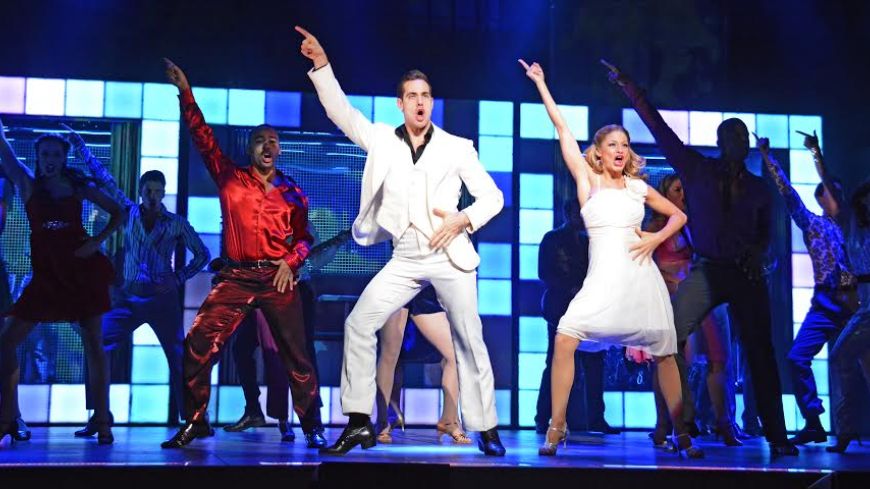 Night Fever does not generate a lot of warmth amongst the first night audience.

Despite having all the ingredients for a fast moving musical, this production only inspired a small percentage of the patrons to their feet during the finale.

Set two decades after ‘Grease’, ‘Saturday Night Fever’ lacks the charm, humour and new songs of John Travolta’s original film. Arguably, this show is more realistic in its language and less subtle about the mating habits of young people, but set in New York it probably reflects the edge of the big city as opposed to mid-west America.

The cast perform the soundtrack of Bee Gees hits but unlike other similar adaptions the original recordings have a unique sound that cannot be easily improved upon with the exception of ‘So deep is the Love' performed as a duet between the principals. The Songs are so good that most of them are reprised at least once if not thrice if you include the encore.

There is a story with a number of sub plots that would keep ‘Soap Fans’ enthralled for weeks but there is a feeling that the abusive father, the devout mother, the younger son giving up the priesthood, the attitude of guys to the girls and vice versa and the dilemma of the group member that gets a girl pregnant are all under-developed.

The dancing is of course what sells the show and if you are an admirer then you will enjoy this production because the dancing is slick and the club singer puts over her numbers with punch and panache. Naomi Slights plays the brittle Stephanie as our impression of a New Yorker and she certainly can move!

The eye candy for the Ladies is Danny Bayne as ‘Tony Manero’ who drew appreciative noises as he stripped down to his boxers while rehearsing his moves in the full-length mirror in his bedroom.

Danny commands the centre stage and matches the other dancers throughout the production.

The show is well lit with good use of upper levels in the set although overall it probably reflects the tattiness of the scenes it recreates.

While the direction is tight and the use of musicians on stage as performers is unusual there is one scene that was lifted from ‘Grease’ and while the choreography was impressive the fight scene lacked the intensity of the rumble from ‘West Side Story’. Although the show has gone round the world, there is in my opinion a need to put a bit of 'oomph' into the opening scenes.

All in all it’s about the dancing but despite the language, there is a morality about the final scenes that was quite effective as an ending.