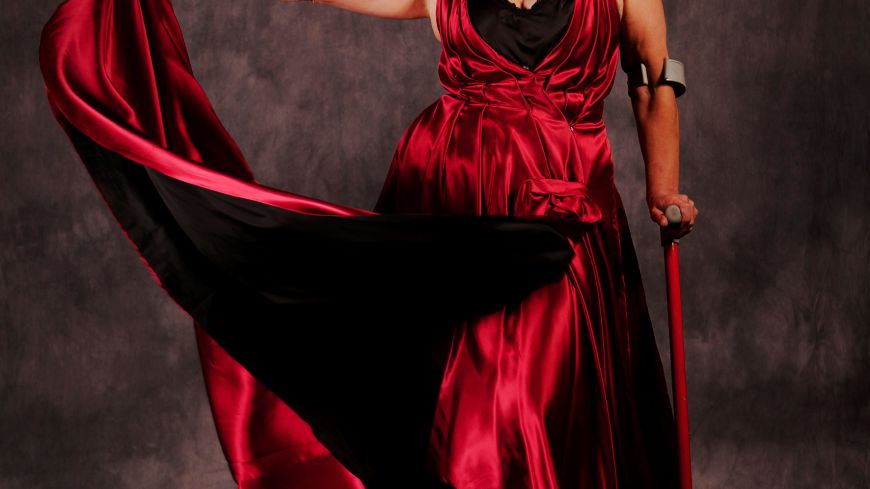 To ‘take someone’s path away’ is how Alison Peebles describes the reality of being diagnosed with and dealing with Multiple Sclerosis in, My Shrinking Life. Based on interviews with family, friends, colleagues and the medical profession since her diagnosis in 2001, the performance, devised by Peebles, looks over her life and how she has dealt with its new route.

The set has an over-powering greyness, from its dusty plastic flowers and old greying nets to the depressing kicked wall of a hospital waiting room complete with green seats and a pigeon (deid or just stuffed) perched high on a wall. There is high activity and what looks like a beauty competition on the big TV screen hung high above on the wall, as a glamorous Alison opens a door and makes her striking entrance down the stairs, one careful, dignified step at a time.

This dull scene goes from reality to razzamatazz with practical pipes turning to neon lights and the grey nets opening to a glamorous boudoir framed in big dressing room light bulbs while a functional multi-bulbed hospital light remains as a symbolic central spotlight.

The story weaves through Alison’s life on stage from childhood onwards, shown through dance and movement and some wild screaming and thrashing around. (There are two child actors, Amy Gallagher and Alice Young, playing her younger self and I don’t know which was performing on 2nd October, but her performance deserves praise).

Much of the surreal action, like ballet dancing with aerosols and vox pops from the boudoir, shows the influence of Belgian experimental director Lies Pauwels, but was slightly bewildering and added nothing to the core of this moving story.

In saying that, Thomas J Baylis’ dance to Bobby Vinton’s ‘60s song, Mr. Lonely, in a sparkling red dress was both elegant and exquisite; a joy to watch.

The music used was eclectic to say the least and sticking to The Everly Brothers, Brian Hyland, Bobby Vinton and Gerry Marsden would have been more suitable as the backdrop to the life self- confessed baby boomer, Peebles.

This is a bold, affecting, self-referential and highly physical performance from Alison Peebles. The presence of the fully functioning dancers could have seemed a cruel contrast but in fact their role high-lit human interdependence and it was they who portrayed the anguish, rage and frustration that must be felt when a life has to be re-assessed, for whatever reason, and life has to move on.

The emotional effect of the performance showing the effects of, as used be said in Scotland, haein the feet cawed fae under ye, whether it be through illness like MS or some similar ordeal was greater than the overall impact of the production itself and the running time of 1 hour 40 minutes was quite long.

There are scenes, though, that will remain with me, like Peebles’ defiant, coquettish poses in the wheelchair when it takes centre stage, and the power of a woman’s relationship with her shoes in her magnificent supported walk in her beautiful shoes that she can no longer wear, showed she has not lost what she calls ‘the art of walking’. Brava.