Made in China, A Play, a Pie and a Pint, Traverse Theatre, Review 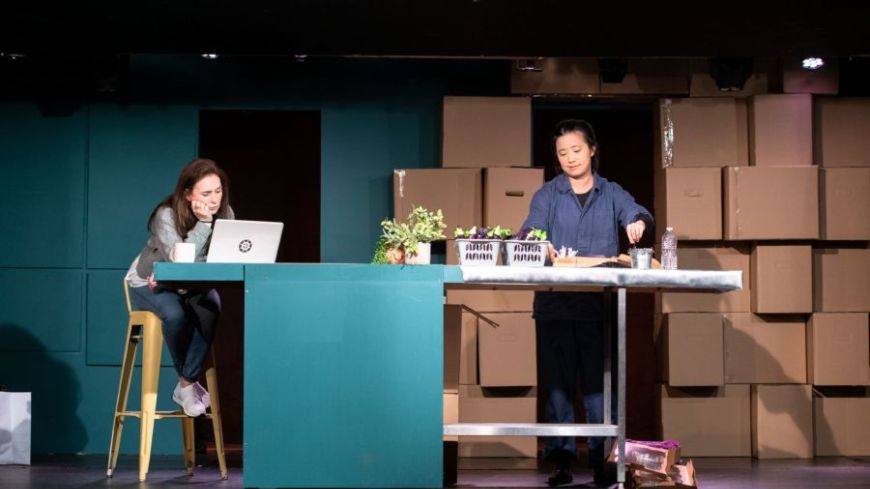 The neatly designed stage set combines the kitchen island table, stool and cabinets of Janet’s home in Wishaw, juxtaposed with the assembly line bench where Hui Ting works in a Chinese factory; the wall behind is piled high with cardboard boxes.

Janet is desperate to purchase the requested fruit baubles for her daughter’s 16th birthday. As she browses Prime on her laptop she is amused by phrases, lost in translation – ‘nihilistic’ instead of ‘realistic’ –  and orders the plastic trinkets (‘not for under 10 years, do not lick or eat’); With a Gel manicure and a meal at Zizzi, the birthday celebration is sorted.

Meanwhile Hui Ting stands adding hooks to glittering aubergine baubles, looking exhausted as she tots up her shifts - 384 hours a month, 96 hours a week, 16 hours a day. But she has to pay for rent, electricity, food and care for her daughter, cooking pork and rice for dinner.  She recalls her family home in a distant village, ‘the forests, hills, mangos and butterflies’, with nostalgia and regret that she is forced to work in the city to make a living.

Janet seems to enjoy a quiet, rather lazy life, morning coffee with friends after the school run, then daytime TV. Although she is stressed out by her demanding and difficult teenager, who is suddenly refusing to eat ham in a toastie as, she explains, no-one eats meat anymore.

The cleverly constructed script takes the form of two separate monologues as we learn about their individual stories, the action shifting back and forward from Scotland to Shanghai.  We observe the awful, inhumane discipline at the factory with keep fit regimes, no bathroom breaks for hours and unfair punishments.  As Hui Ting packs another box, she imagines if the aubergines were real, she would ‘braise them with green peppers, potatoes and garlic’.  The dish would be called, ‘A Crane landing on a misty lake at dawn’.

When Janet opens the parcel of decorations, made in China, she finds a hidden note which she cannot translate but is keen to play amateur detective. She feels there’s an important mystery which she needs to solve, a message in a bauble, not a bottle. It is, however, all based on fact.

In 2019, Florence, a 6-year-old girl in South London was writing Christmas cards when she found a note written in one of the cards: ‘We are foreign prisoners in Shanghai Qinqpu prison, forced to work against our will. Please help us and notify human rights organisation."  (Tesco immediately halted card production at the factory and launched an investigation).

Likewise, this is a powerful comment about the over-consumerism of the West set against the profiteering and human cost behind cheap production in the East.

Slickly and sensitively directed by Philip Howard, the contrasting narratives are dramatised in a very different manner and mood: With her sardonic and self-deprecating humour, Janet is like a fun loving, happy-go-lucky, Soap Opera character from River City - all sharp, witty, West Coast banter.

Standing in her navy blue uniform, Hui Ting, is the complete opposite, trapped like a bird in a cage, but she has dreams that one day she will fly free.  Her style of language is so beautifully poetic, spoken with a musical rhythm.

The performance duration is shorter than expected, at just 45 minutes - a tad too swift; the abrupt ending does not wrap up the intertwined, involving stories of the two women as a satisfactory denouement.

Jo Freer and Amber Lin both capture the underlying nuances of Janet and Hui Ting’s well rounded and believable personalities, with such warmth and understanding.  For the audience, we follow their parallel journeys, shifting from laugh out loud jokes to quiet moments of heartbreaking emotion.

Food for thought, along with Hui Tings’s delicious recipe for aubergines.